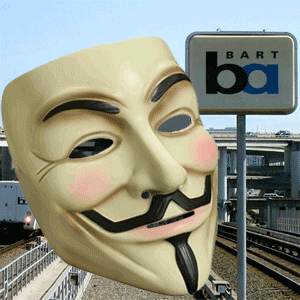 Anonymous Lashes Out Against BART Over Anti-Protestor Cell Phone Blackout

A particularly reactive sub-faction of Anonymous has brought down the hammer on BART (Bay Area Rapid Transit) a Sate of California government agency that runs trains and platforms for commuters and tourists in the area. In what the faction is calling #OpBART they have defaced the BART web page and released names, passwords, and other personal data stored on the marketing site MyBart.org.

These attacks and the development of #OpBART come during the wake of government attempts to stifle protests directed at law enforcement misbehavior by shutting down cell services within the tunnels that the rapid transit trains run through. The demonstrations last week had been planned to protest the recent killing of a knife-wielding homeless man by a BART officer and the 2009 fatal shooting of an unarmed passenger by another BART officer.

In what’s been dubbed “pulling a Mubarak” authorities shut down cell communications in the affected areas by turning off the cell phone coverage extenders controlled by BART. The transit authority has responded that they increased officer presence and that they still had emergency phones and employees on hand should any crisis have arisen during their pre-planned disruption to cell phone service when they were attempting to shut down or prevent the protest.

The leak contained 2,001 names, along with their passwords, who used the myBART service and in many cases addresses and phone numbers were published as well.

“We are Anonymous, we are your citizens, we are the people, we do not tolerate oppression from any government agency,” read the manifesto as part of the info dump. “BART has proved multiple times that they have no problem exploiting and abusing the people.”

The hackers also harshly criticized BART for their inept handling of their customer’s personal information: “[BART] stored their members’ information with virtually no security,” they wrote. “Any 8-year-old with an Internet connection could have done what we did to find it. On top of that, none of the info, including the passwords, was encrypted.”

The Anonymous also announced that they’ve organized their own protest for5pmMonday at theSan FranciscoCivicCenterstation and threatened continued attacks.

BART has advised passengers that protestors may attempt to disrupt service during the afternoon commute Monday in downtownSan Francisco.

The hacktivist group has become more active as late lashing out against the websites of governments and corporations involved in the suppression of civil liberties against populations. Mainstream media has been more apt to cover their antics and hactivist cyber vigilante protests and thus draw a lot more attention to the activity and ideology of this collective overname. Anonymous itself is not a single group, but a name used by subfactions in order to tie themselves into an overarching ideological banner.

No news from the agency whether or not they’ll be shutting down cell service for their passengers again before the disruption as they did with the last protest that spurred the Anonymous compromise of their website.