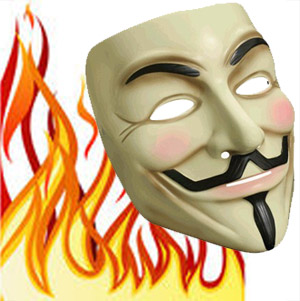 The weekend brings us news of Anonymous grabbing their masks, torches, and pitchforks and raiding a series of privacy-hardened darknet websites. An Anonymous hactivist cell is claiming responsibility for taking down more than 40 child-pornography websites and releasing the login information for more than 1,500 members of those websites.

We’ve already seen what the Anonymous collective can do when the hackles of its members have been raised. In this case it’s not just because of sites posting images of the abuse of children; but also because they’re using a technology osentively created to help protect the anonymity and free-speech rights of oppressed peoples by hiding their communications from authorities. The privacy-hardened websites that Anonymous hit during this campaign used the TOR “onion-routing” network to hide their location from would-be trackers.

To the speech-loving, but highly moralistic collective this probably hit home for their general efforts.

The sites were part of the Hidden Wiki: a link collection of darknet sites protected by carefully crafted veils of technological anonymity. These sites are places that cannot be ordinarily accessed by users on the Internet and are largely invisible to the world as a whole. Only those running a special plugin for their browser can obtain access (although anyone with the knowledge of where to look and the plugin can do so.) Underneath the layers of the Hidden Wiki is a digital Mos Eisley—a virtual crossroads where underground dissidents and the nefarious can gather to trade secrets and reveal secrets.

The sites in question carried everything from the Wikileaks cables, to LulzSec leaks, and even information captured and released by Anonymous. The contents range on a spectrum from harmless to horrific.

It’s likely that numerous Anonymous cells use this darknet and the TOR-network to deal in controversial information and to store gathered intelligence and leaks in a way that the offended parties cannot erase the information. As a result, having discovered that child pornographers were also residing in their domain caught their attention and raised enough of their ire to kick them out.

According to the timeline, Anonymous began their “Operation Darknet” or #OpDarknet campaign upon discovering that some of the child pornography links within the Hidden Wiki all hosted on a singular server. According to well-known blogger Violet Blue, “An Anonymous Pastebin statement explains that their new campaign manifested upon finding a Hidden Wiki listing called ‘Hard Candy’ that they say ‘was dedicated to links to child pornography.’ Anonymous claims that most of the pedophile-content sites listed on the Hidden Wiki, ‘shared a digital fingerprint with the shared hosting server at Freedom Hosting.’”

Technology and vigilantism, a fractal-edged sword

The TOR-network exists as an extremely powerful tool to help people maintain anonymity online. Permitting the Internet to serve its function as a leveling field for speech—it goes so far as to permit people in highly oppressive regimes like China to maintain their secrecy while critiquing tyrannical government actions—but it’s a double-edged sword that also permits the criminal underground a place to hide from the light of direct scrutiny.

The vigilante behavior of this Anonymous cell also rises as a sort of double-edged blade as they try to clean what they see as scum on their carefully crafted tool. Their activity certainly shines a light into the dark places of the net; but it also might get in the way of police efforts to track down and capture the individuals purveying these illegal images.

From what we know about the attack, the Anonymous cell didn’t manage to pinpoint the location of the servers, and the usernames that they leaked from the websites may have been “public” (within the confines of the darknet) knowledge anyway. None of the users of these websites seem like they’d be foolish enough to have put down their actual information and usernames don’t exactly map back to an individual person.

This action may hinder the investigation of authorities; but at least it gets them off the doorstep of far more legitimate uses.

The problem also relies that the general public misunderstands the nature of technologies that support free speech and that what protects their privacy must necessarily protect the privacy of others: nefarious and innocent. This sort of activity both highlights the civil interest of hacktivist groups like Anonymous and the nature of darknets. I expect that politicians looking for a quick vote may spin this event to blindly paint Internet anonymity tools in with criminality and craft ill-thought-out legislation that will add even more double-edged swords to our culture.