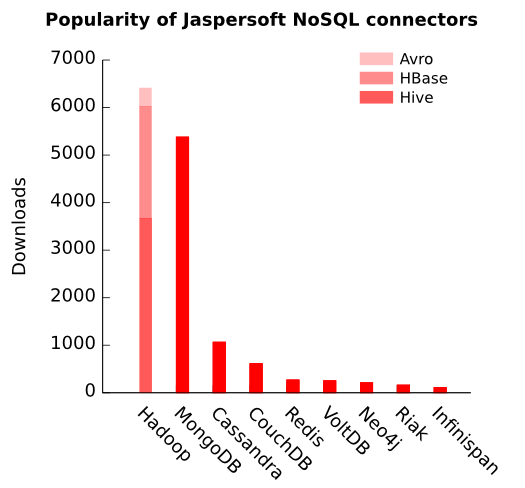 Trying to determine what new technologies have traction – and therefore what job skills to train for – can be tricky business. Practicioner-centric analyst firm RedMonk is constantly analyzing various data sources to determine which tools are most popular. For example, I looked at their analysis of Puppet and Chef’s relative popularity earlier this month.

Today the firm’s newest analyst Donnie Berkholz mined a new data source: the open source business intelligence vendor Jaspersoft’s download data for its NoSQL connectors. From this we can get a sense of what NoSQL databases are in use by Jaspersoft’s user base.

Note: VoltDB is actually not a NoSQL database but a “NewSQL” database.

Compare that with this graph of searches for different NoSQL databases on Google as of this morning:

Note: Google Trends only lets you search for five keywords at a time, so I took the top six minus Cassandra (which I suspect adds too many false positives) from the RedMonk/Jaspersoft graph.

And this graph of job trends from Indeed as of this morning:

Note: I took off the weakest performers to make the graph easier to read.

Here’s that one again but without Hadoop:

Update: Originally I’d posted relative growth graphs from Indeed, but I’ve replaced them with absolute growth graphs because they map more directly to the other graphs above.

Jaspersoft’s number may not reflect over all usage of a particular data store. It’s probably better to think about this data as a reflection of how these tools are being used for BI. For example, Redis appears to be more competitive in job and search trends than in Jaspersoft’s data. That could be because Redis is being used elsewhere but not much for BI. Also look at the difference between HBase and Hive usage. Hive is typically used for data warehousing so it makes sense that it would be integrated more often with BI tools than the more real-time oriented HBase, which is probably seeing more use in Web applications than BI applications. It’s actually pretty interesting that HBase has as much traction as it does in BI, at least based on this data, and may reflect adoption of real-time analysis in BI.