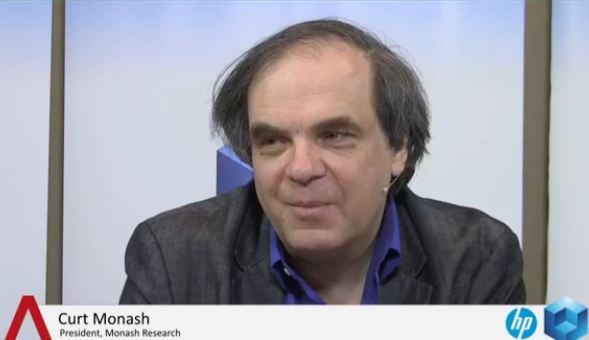 For the last day of HP Big Data Conference 2013, theCUBE co-hosts John Furrier and Dave Vellante managed to persuade a couple of iconic figures to sit down and discuss the hottest topics of the moment. One of these high profile guests was Curt Monash, President of Monash Research and “a long time industry analyst, blogger and opinion-maker”- as Vellante introduced him.

Monash was quick to sanction the term “Big Data” because it’s overused and misused. There are a lot of things called Big Data that have indeed a lot of reality to them – the size of the databases (large and getting larger) and the need to scale out, for example…

Very quickly the discussion turned to a subject Monash has taken a great interest in: privacy.

“Privacy is hugely important,” said Monash. “Governments have guns that could kill everybody; we have rules in place that would normally dissuade them. We have to have those rules, otherwise we would live in tyranny. I think surveillance is almost on that same level of seriousness,” he warned.

“If you take a look at what’s being tracked – every transaction by the credit card, our physical location by the licence plate cameras, our mobile devices and our credit cards, our communications, you’ll see that the implications are extremely dangerous. Extreme surveillance could lead to discrimination from the employers, insurers and credit granters.” Monash explained further: “The government WILL have all the information, but we need more rules on HOW the information is going to be used.”

Preventing abuse for Big Data use

“We need to prevent abuses and we need to prevent them so well so that it doesn’t have a chilling effect on exercising ordinary freedom”, said Monash. “One should not avoid going rock climbing for fear of being labeled as a risk taker, and therefore not being hired by a conservative organization. One should not be forced to pay cash instead of credit card to hide the recreational rock climbing. As an industry, we have to show leadership and educate law-makers and regulators.”

Getting new laws and new procedures in place is going to take years, Monash believes, and for that we need to start right away. Right now, the best political action for avoiding “tyranny through surveillance” is inhibiting the exchange and storage of information. This has the downside of interfering with health research and business as well as other things.