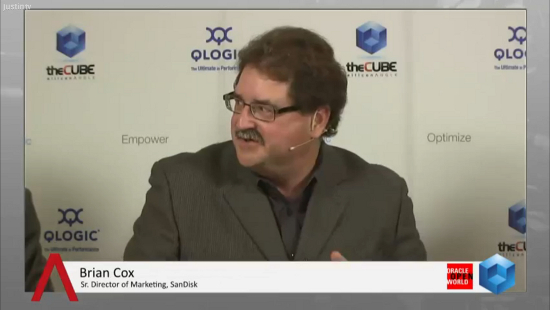 SanDisk “pioneered flash memory based storage 25 years ago,” Cox said. “People see their products that take the form of everyday use cards,” camera cards and thumb drives. The company helps customers have a richer experiences with those devices. SanDisk technology is also used by smartphones, ultrabooks, tablets, and other such devices to benefit from very rapid performance, low power and cost effective solutions.

SanDisk is a $5.6 billion company as far as revenue. Its R&D investment is upwards of $1 billion, and they have 5000 employees worldwide. Asked about SanDisk customers, Cox said they work very closely with server and storage vendors such as Dell, HP, IBM and “we’re picking up every day a number of the fast emerging flash array vendors.”

In the enterprise space, “we look at what we can do to further unleash the applications performance, enhance user experience, drop the cost,” Cox explained. When approaching this segment, “companies instantly recognize the company from their experience as a consumer.” SanDisk helps apps run more predictably, help the data center manager lower the infrastructure costs. “It’s not just lowering the hardware costs, but also the licensing costs,” Cox said.

When is Flash the way to go?

Exemplifying where flash technology is the right answer to enterprise problems, Cox mentioned flash can help run Oracle apps financials more quickly, “that has meaningful impact for the financial reporting of a company.” In the operational sector, SanDisk flash technology can help better run ERP apps, which helps reduce costs and increases efficiency in delivering products to end customers.

Watch the full-interview with Brian Cox, Senior Director of Marketing at SanDisk below:

Cox also showcased a SanDisk prototype –ULLtraDIMM, which is basically flash technology on a memory module (stay tuned for the archived video embed).  It allows clients to plug in a relatively inexpensive flash storage instead of RAM. The flash technology that you see on SD cards and thumb drives powers this prototype, reaching up to a terabyte in capacity. The drive stacks flash chips inside, it can be dropped without worries about it being damaged.

Asked about differentiation, Cox explained “it’s all just an enabler for the applications.” To have a full stack, full ecosystem, there is “a combination of what you do as enabler in hardware, but also in software.” In order to provide that, the company made a few acquisitions. One of them is Flashsoft, a “server side caching software,” helps optimize putting active data on the fastest storage one can get, “hitting the hot data to really the fast storage.” A second acquisition was Schooner, which helps with in-memory databases, acting as an extension to DRAM and putting it onto flash.

As far as flash as storage technology is concerned, it “is much more resilient in regards with failures. It’s very predictable, it’s measurable,” Cox said.