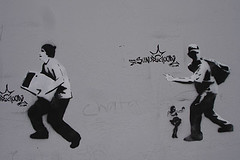 The new claim comes via evidence from the Department of Homeland Security (DHS,) who believed at least during one period of time that Karpeles was the mastermind behind the notorious black market.

What exactly the “wealth of evidence” is was not disclosed, and the case has been adjourned to give the prosecution time to deal with the new evidence.

Karpeles has denied the claim, telling Motherboard in an email that he wasn’t Dread Pirate Roberts.

“This is probably going to be disappointing for you, but I am not Dread Pirate Roberts…I have nothing to do with Silk Road and do not condone what has been happening there. I believe Bitcoin (and its underlying technology) is not meant to help people evade the law, but to improve everyone’s way of life by offering never thought before possibilities.”

It’s difficult to say who’s right here; where as it’s clear that it’s a ploy by Ulbricht’s defense, Karpeles is hardly beyond reproach either. Mt. Gox under Karpeles leadership lost $620 million worth of Bitcoin in what Japanese police believe was an inside job. At the very least Karpeles is an inept, bumbling fool, and at worst a criminal mastermind.

The trial will resume next week.