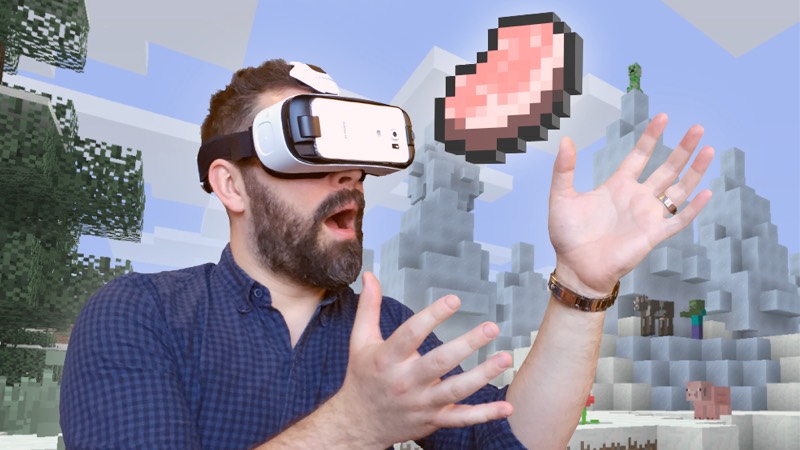 In what will be the first big virtual reality hit and a key driver behind the adoption of the technology, Microsoft-owned Mojang has announced that Minecraft is now available for the Samsung Gear VR.

Minecraft: Gear VR Edition is now available in the Oculus Store for $6.99 and offers all the features of the Pocket Edition, including Creative and Survival modes, skins, and multiplayer.

Differentiating it, however, is that the virtual reality version allows you to switch from the default theater view to a first-person view that puts you in the game itself, delivering the opportunity to examine what you’ve built in Minecraft as you would in the real world.

“Minecraft is a game that you can both figuratively and literally lose yourself in,” Oculus Chief Technology Officer and legendary game designer John Carmack said in a blog post. “In fact, my strongest memories of being inside VR are from the time I’ve spent exploring Minecraft on Gear VR.”

“Experiencing it in virtual reality changes it from an abstract activity to a visceral one – it goes from a sense of playing the game to one of being inside your world, and spinning around to find a creeper sneaking up on you leaves a powerful impression,” he added.

“Infinite worlds have been explored, shaped, and shared by millions of people, and now in VR; that sounds a bit like the fabled Metaverse.”

Unfortunately within the Oculus Gear VR store (that is the store you interact with inside virtual reality) there’s no demo or even virtual reality trailer you can play, so it’s hard to review, but that said if you’re a hardcore Minecraft fan that’s not going to stop you from wanting the app, particularly at the bargain price of $6.99.

Minecraft is currently the third best-selling videogame of all time, and although it will never defeat Tetris with 425 million copies sold, it’s only a matter of time until it passes Wii Sports on 82.72 million (Minecraft currently sits on 73 million at the time of writing).

The game has literally changed the word of computer gaming, and its users span all age groups and genders; it could be argued that Minecraft is the Lego of the 21st century.

Samsung’s Gear VR went on sale in November last year and actually sold out at one stage, but no one knows for sure how many units have been sold.  It has one huge advantage over other virtual reality headsets such as the HTC Vive and Oculus Rift, and that’s price.

Set at $99, the Gear VR’s price is a cheap entry point into virtual reality, and although users are required to have a later model Samsung phone to use it, given the huge success of the Galaxy S7 that’s not going to be a big issue.

The temptation of a virtual reality version of Minecraft is going to drive Gear VR sales and potentially Galaxy S7 sales because even if a small percentage of Minecraft fans want to experience it, that equates to millions of people.

You can buy Minecraft: Gear VR Edition from the Oculus Gear VR app or the store within virtual reality itself. Note that a GamePad is required as well.