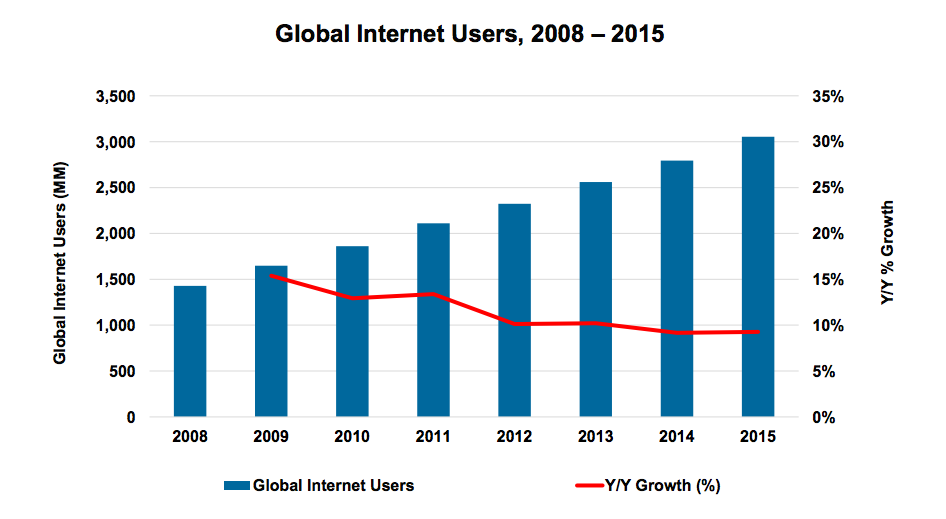 The number of additional people streaming onto the Internet has stalled, Apple’s iPhone has peaked and voice interfaces are one of the next big things.

Those are some of the key trends identified by longtime tech analyst and Kleiner Perkins Caufield & Byers partner Mary Meeker in her well-read annual report of Internet Trends. Meeker presented the report, a typically data-packed 213 pages, today at tech site Recode’s Code Conference near Los Angeles.

Just as Moore’s Law has driven hardware and software innovation for decades, so the growth in Internet users has sparked a two-decade boom in online services. Now, with Internet penetration at 42 percent of people worldwide, or 3 billion, that engine is stalling.

User growth worldwide last year was only 9 percent, and India, a less lucrative market for many services, led much of the growth to become the second-largest Internet market. That slowdown poses challenges to thousands of apps, cloud services and other products that depend on more and more people coming online.

“New Internet users are going to continue to be harder to find,” Meeker said at the conference. “Easy growth is behind us.”

Easy growth is past for the iPhone too, Meeker noted in a somewhat less surprising trend. By her estimates, unit shipments of devices using Apple’s iOS mobile software could lose 11 percent market share in 2016. Google’s Android, though, wil see its market share grow by 7 percent this year.

Meantime, both Apple and Google, and even more Amazon, are poised to gain on the strength of another emerging trend: voice interfaces. Amazon’s Alexa-powered Echo speaker, Apple’s Siri and Google’s coming Assistant as well as the current voice search all are finding rapid acceptance. Some 20 percent of searches on Android are now done via voice, for instance.

As usual, the report is full of other data-backed trends and insights, including the rise of messaging as a platform for both personal and business communications that could replace the home screen as the main portal into online services; the return of automobile innovation to the U.S. even as ride and car sharing could depress car sales; and the emergence of data itself as a flexible platform for many dominant businesses: