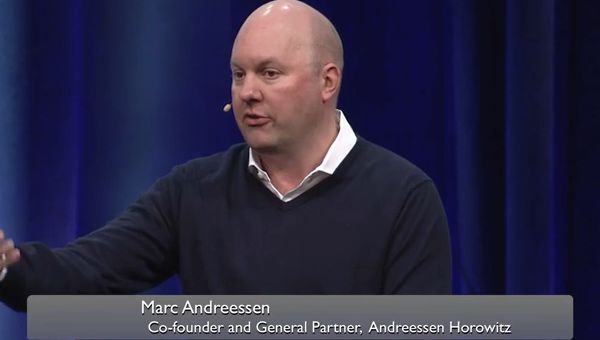 When the venture capital firm Andreessen Horowitz announced its fifth fund a month ago, Managing Director Scott Kupor said the theme for the $1.5 billion fund would remain the same as the previous four: Software is eating the world.

The notion, articulated originally by cofounder Marc Andreessen (pictured) five years ago, is that software is disrupting nearly every traditional industry, or eventually will. But this week, Andreessen and his partner, Ben Horowitz, recorded a podcast with Kupor and editorial partner Sonal Chokshi that updated the theme. It’s now “Software programs the world.”

Even if that theme doesn’t have quite the bite of the original, it’s always interesting to hear how one of the world’s leading VCs thinks the world of tech and beyond is changing. In the podcast, released July 10, the pair identified several big changes, some very recent, that are informing what they think will be the most promising investments in the next few years.

First, a little history: A16z, as the firm is sometimes called, raised its first fund almost exactly seven years ago in the thick of the financial crisis, when everyone thought it was a dumb idea. It turned out to be great, Horowitz said, because there was an unprecedented confluence of three gigantic new platforms: mobile, social, cloud. (Side note: SiliconANGLE was the first blog to call out those very three trends on its site tabs.) But we’re coming to the tail end of the first phase of the most obvious applications that leverage two or three of those trends, said Horowitz.

Now, explained his partner, several new trends are piling on top of the previous trends. For one, Andreessen said, since about seven years ago, Moore’s Law, the decades-long reality that the number of transistors on a silicon chip integrated circuit has doubled about every two years, has completely shifted. Instead of meaning the power of chips is doubling for the same price, it’s now that they’re offering the same power for half the price. Thus the mobile revolution.

But it’s more than that. This is a “a massive deflationary force on tech and I suspect the overall economy,” Andreessen said. “The end state is chips will be free and they will be embedded in everything.”

The second trend is that all those chips will be on the Internet. When every physical object is networked, he said, “you can essentially program the world.” Thus the Internet of Things.

Third, the continuation of software eating the world means that software can be applied to all homes, or all businesses, or all cars–industry after industry. “Entrepreneurs just assume that if there’s something to be done in the world, there must be a way to write software to do it,” he said. Thus you see Uber and Airbnb and so on tackling every industry.

That means, said Andreessen that “as a fund, we’re in markets where we wouldn’t have anticipated being in.” The firm has invested in Airbnb in hospitality, Comma.ai in cars, Everlaw in legal services, Honor in senior home care, Instacart in grocery, Lyft in ride-sharing, OpenGov in government data, Soylent in food, and several companies including Branch and Coinbase in financial services.

The new confluence of trends means that the nature of technology platforms is changing too. Where once a new chip spawned a new operating system platform, now computing is done across lots of chips. Cloud computing is one of the first examples of that. But there’s also Hadoop and Spark for distributed processing, bitcoin for finance, and most recently deep learning neural networks, all inherently distributable across many processors.

The importance of Big Data in all these applications often has meant the big companies that can amass it hold the cards. But Horowitz said there are still opportunities for Big Data-driven startups in areas where data is still not centralized, such as health care. He also thinks AI could be applied to creating a better user interface for smartphones using natural language and gestures. And he think new applications that don’t work at all without these more natural interfaces present an opportunity for startups, or at least upstarts–like Amazon.com Inc. with the Echo voice-enabled speaker.

Yet another reason not to write off startups: The cloud and open source software make it much cheaper and faster for startups to use new data-driven services such as machine learning. And the latest generation of deep learning experts are working on making artificial intelligence work with small data sets, another trend Andreessen said could tilt the playing field more toward startups.

Most of all, startups have a chance as more computing moves to the cloud to create applications that couldn’t be done easily with traditional software, including specialized vertical applications. They could be economical to provide in the cloud to a much larger range of medium-sized companies, many outside the U.S. and Europe, that never bought enterprise resource planning (ERP) software in the last big software industry boom.

But Andreessen implied that there’s plenty of opportunity for many companies. There are $10 trillion in government bonds around the world collectively offering negative yield, which he said means people are searching for more productive places to put capital. “The world has never been more ripe for a large wave of innovation that would be easy to finance,” he said.

If all that sounds remarkably optimistic at a time when there’s mounting pessimism in Silicon Valley that billion-dollar unicorns are worth as much as investors had hoped, Andreessen did nod to the uncertain economic environments with some parting advice: Startups should raise their prices.

That way, he said, they can afford an adequate sales and marketing effort, the lack of which often dooms the majority of startups that don’t get lucky with a viral product. What’s more, customers take a more expensive product more seriously and they’re more likely to use it after they buy it.