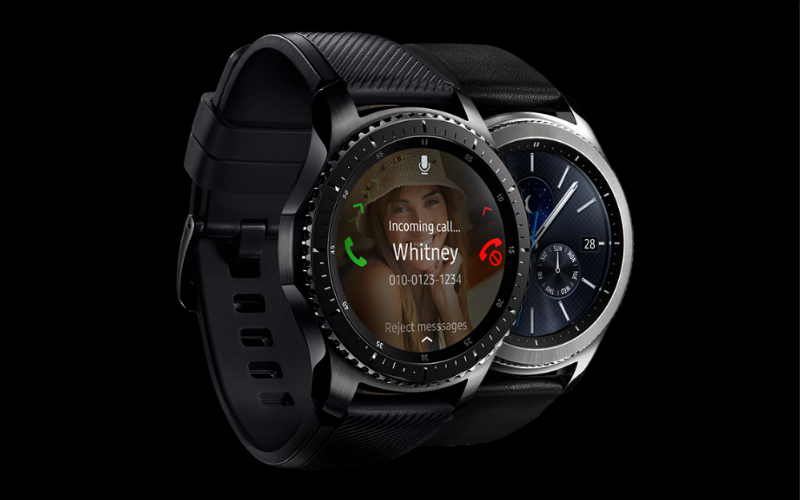 Samsung Electronics Co. Ltd has launched its next generation of smartwatches, the Gear S3, at its Unpacked event in Berlin, Germany. The company was inspired by traditional timepieces and has launched a minimalist, luxury Gear S3 classic model, and a rugged, outdoor model, the Gear S3 frontier.

We look at how the Gear S3 classic and frontier, with features like LTE connectivity, built-in GPS and speaker, and mobile payments, compares to its predecessor the Gear S2.

To cater to different users, Samsung offers two models of its latest smartwatch. The Gear S3 frontier is a rugged version while the classic version offers users a more luxury option.

The signature rotating bezel includes enhanced features including the ability to accept and reject calls or snooze an alarm without touching the screen. Users can write on the display and messages will automatically convert to texts.

Samsung’s Super AMOLED display for the Gear S3 has increased in size from the Gear S2’s 1.2 inches up to 1.3 inches. The Gear S3 keeps the Always On display like its predecessor, but ups the number of colors supported significantly, to 16 million.

Both Gear S3 models are both thicker and heavier than its predecessor, measuring in at 12.9mm compared to 11.4. The Gear S3 classic weighs in at 57 grams, while the frontier is heavier at 62 grams.

The Gear S3 classic is limited to Bluetooth, but the Gear S3 frontier model offers users both Bluetooth and LTE. Both devices have Wi-Fi capabilities.

The Gear S3 frontier is the first to offer LTE support and will allow users to head out for a run or cycle without taking their phone with them. While the built-in GPS functionality on both models will allow for accurate monitoring of your fitness activities.

Both devices come with Samsung Pay installed, so you can pay for purchases without removing your phone while Gear S3 frontier users don’t even have to have their phone with them. The Samsung Pay information is stored as tokens on the device and protected using Samsung Knox.

When it comes to the operating system, Samsung has stuck to the Tizen Based Wearable Platform for the gear S3. If you are a BMW owner, Samsung has integrated BMW’s personal mobility companion with the Gear S3. Together with the BMW Connected app, drivers can get alerts to check their fuel, unlock their car, etc.

Samsung has also made the Samsung Knox Tizen Wearable SDK available to third parties, allowing for the development of customized applications.

The Gear S3 also has a built-in speaker allowing you to talk directly to your watch when you receive a call. You can also stream music through the Gear S3 via Samsung’s partnership with Spotify AB. Depending on the model you will stream the music via Wi-Fi or LTE.

The battery of the Gear S3 has been bumped up from 250mAh to 380mAh, which makes sense considering the addition of GPS and the slightly larger display. Samsung claims the Gear S3’s battery will last up to four days, but we will have to see how it performs in the real world, especially the LTE-enabled Gear S3 frontier model.

When the Gear S3 classic and frontier will be available is unknown at this stage. If you are interested in getting your hands on the Gear S3 you can head over to the Samsung site and sign up for updates.