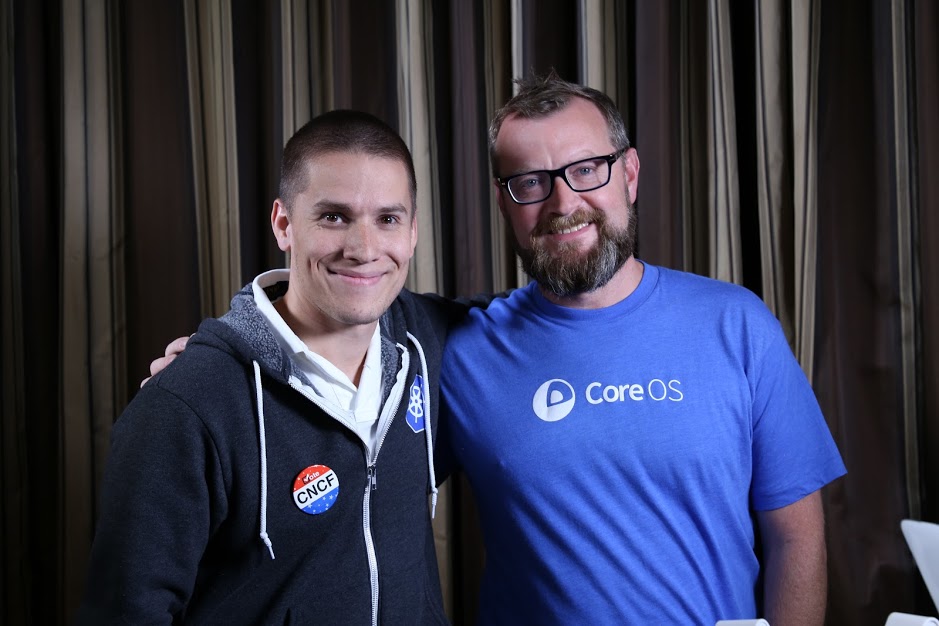 As the movement to further the education and advancement of Docker, Kubernetes and Cloud-Native architectures continues to grow, the Cloud Native Computing Foundation hosted KubeCon 2016 in Seattle, WA, this week to gather leading Kubernetes technologists from multiple open-source cloud-native communities.

During the event, Jim Walker, VP of Marketing at CoreOS Inc., and Joseph Jacks, senior director of Product Management at Apprenda Inc., spoke to John Furrier (@furrier), co-host of theCUBE*, from the SiliconANGLE Media team. KubeCon is a biannual community conference dedicated to Kubernetes, the open-source container cluster management software project by Google.

Walker and Jacks spoke to Furrier about what’s going on at KubeCon, as well as in cloud-native and open source as it evolves.

Furrier brought up the point that the ecosystem of the Kubernetes community is a big part of innovation growth for the future. KubeCon was first put together last year, on the fly as a kind of meet-up, but then it grew very fast, he pointed out.

“I’ve been honored to be involved with Kubernetes from almost the very beginning. I was following the project as it got announced, and I was excited to see the project grow in the first six to nine months. You could tell there was something really special about the technology … the community was really genuine. There was a really high focus around the overall release cadence and features,” said Jacks.

He said that last year’s conference had 550 people. Despite being put together on the fly, they ended up having 35 corporate sponsors with lots of multinational companies involved, including VMware, Red Hat, Metaswitch and Google. This year, the conference had 1,500 attendees, plus a waiting list; conference officials anticipate several thousand people will attend next year.

Kubernetes as the ‘Linux kernel’ for distributed systems

Furrier spoke about the industry reshaping what’s happening, where companies are no longer tolerating software lock-in. However, if there’s no lock-in, there’s no proprietary strategy relative to proprietary software, and so what’s the competitive advantage?

He pointed out that, for example, Amazon Web Services’ competitive advantage is speed and code pushing. It pushes so much code and has a flywheel of leverage that people can leverage with the code. So the alternative is for companies to do it themselves; but it would be impossible for them to achieve the efficiencies of what Amazon is producing, which speaks to the dynamic in a community model.

Jacks agreed, and said, “There’s a beautiful analogy of Kubernetes being sort of the ‘Linux kernel’ for distributed systems, or you can look at it as a POSIX (Portable Operating System interface) for distributed systems. If you take Linux as an example, there’s just this explosion of distributions. As Linux started to stabilize and become more reliable, vendors came in and started to package the system. We’re going to see the same thing happen with Kubernetes; we’re starting to see major multinationals invest in the technology and provide their own distributed approach around packaging and integration with different tools … starting to invest serious dollars and stabilizing the code base.”

He gave the example of Ticketmaster running a $25B e-commerce business on Kubernetes, moving that onto Amazon and shutting down multiple data centers. Kubernetes serves as their layer and direction of applications and Amazon lock-in. Stabilizing Kubernetes, making it consumable for enterprises, that’s where Jacks see the differentiation as coming in.

Walker added, “I think what’s happening in open source, and especially Kubernetes, is a response to cloud providers setting up these shops and saying, ‘OK, I’m going to have services and servers underneath that’; you’re kind of in Amazon at some point. The lock-in is kind of there. So if you look at what Kubernetes is doing to this community, it kind of opens it up again.”