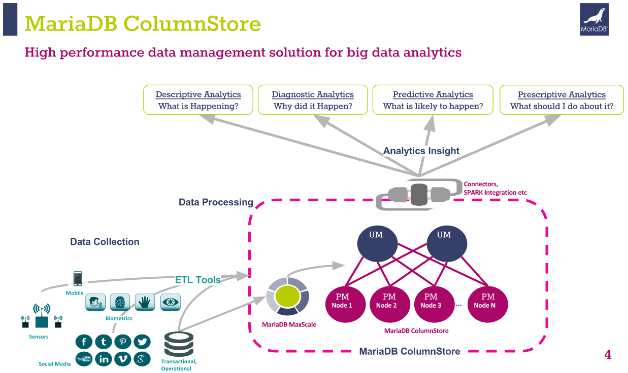 MariaDB Corp., the database company that sells a commercial version of the open-source MySQL database of the same name, is attempting to unite transactional and analytic processing in a single front end to deliver enterprise-grade big data analytics.

“Data warehouses are famously expensive and complex – requiring proprietary hardware which makes it nearly impossible to deploy on the cloud, or on commodity hardware,” said David Thompson, vice-president of engineering at MariaDB. “MariaDB ColumnStore makes data analytics more accessible, on premise, in the cloud or in a hybrid deployment.”

MariaDB ColumnStore is an effort by the company to widen its audience, and it’s doing so by offering a much cheaper alternative to popular analytics databases like Terdata or Vertica.

ColumnStore isn’t a brand-new project. MariaDB first announced it in April, revealing that it’s a port of the existing InfiniDB, whose parent company has now gone defunct. MariaDB took over that project in 2015, where it continued to support its customer base. It was only then that MariaDB saw how InfiniDB’s column-focused technology could be used to add OLAP (Online Analytical Processing) capabilities to its OLTP (Online Transaction Processing)-based MySQL database.

MariaDB explained in a blog post that column-stored data is better suited for high-speed reading and searching of data sets, and claims multiple benefits by infusing these capabilities into its own product. For one thing, users can perform queries that mix both InfiniDB’s columnar data with MariaDB’s row-based data. A second advantage is having a native SQL querying layer built into an OLAP solution. Most OLAP products have had to add this feature separately, the company noted.

“The demand for robust analytics technologies has exploded as companies look to derive greater value from increasing data volume,” said Jason Stamper, an analyst for data platforms and analytics at 451 Research. “MariaDB’s ColumnStore is a new option for high-performance analytics to big data, which aims to enable faster and more efficient queries while eliminating delays and reducing enterprise data warehousing expenses.”

The biggest advantage, though, may be cost. According to MariaDB, ColumnStore costs on average “90.3 percent less per terabyte than commercial data warehouses. That’s quite a claim if it’s true, but MariaDB didn’t provide any evidence to back up its claims.

MariaBD said its ColumnStore is available now here. For those who’d like a little help getting started, MariaDB is also offering a new ColumnStore JumpStart program, which promises to deliver a ready-to-use ColumnStore environment to customers in as little as three days.