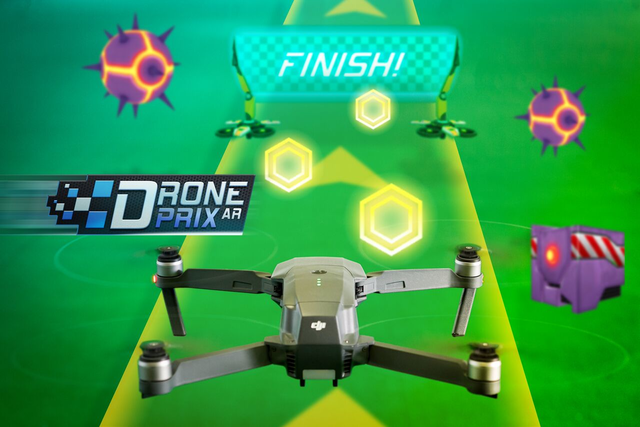 Flying a drone may be fun and games already for most who own one of these remote-control flying robots but as it turns out setting up an obstacle course is not as easy as it sounds. Add in that the average consumer drone can cost hundreds of dollars, accidentally crashing it into something would be devastating to the wallet.

Enter Edgybees Ltd., an augmented reality technology company, with today’s launch of “Drone Prix,” an AR game designed for use with drones developed by DJI.

Based in China, Dà-Jiāng Innovations Science and Technology Co. Ltd. is a world-leading aerial platform developer of both consumer and industrial drones. DJI’s drones include the pre-built Phantom 3 — consumer professional drone that runs between $400 and $1,250 — and the extremely advanced Manifold developer platform. The company’s lower cost drones have also been cited as part of a trend leading to 2016 doubling the number of drones sold in the U.S.

The game is an AR mobile app designed specifically for use with DJI drones — including the Phantom 3, the Phantom 4 and the Mavic Pro — developed using the DJI software development kit with the aim to give drone pilots, especially newcomers, a safe, easy way to train and have fun.

Centered around a virtual obstacle course, Drone Prix uses the camera mounted on the drone in order to produce an alternate reality. The drone can then be maneuvered through the course while collecting rewards and avoiding obstacles along the way.

Drone pilots can even compete with one another for best performance, points and time. Scores will be displayed on a global leaderboard visible to all players.

The key features of the Drone Prix game include solo and competitive game modes: a race against the clock to beat previous scores and make it onto the leaderboard. A flight assistant mode where the operator is directed to follow a guide path in a 3D space while avoiding obstacles and collecting coins. The game supports multiple courses of various complexity for pilots to test their reflexes and skills.

The final feature includes a social media engagement element that allows pilots to link their user ID to Facebook and share achievements with top-performing pilots.

“When we first came up with the idea for this app, we wanted to create a new experience for pilots combining the joys of flying with the thrills of gamification,” said Menashe Haskin, Edgybees’ chief technology officer and co-founder. “The Drone Prix AR app is really the first augmented reality social game designed specifically to do just that.”

Although the focus of the Drone Prix app is designed as a game, its introduction provides a window into the potential for AR and drone piloting.

The game itself is essentially a pilot training course, tying together a physical activity (flying the drone) with a virtual activity (the obstacle course), which could be used by numerous industries to help enhance the skills of drone pilots who would be using drones to inspect buildings in architecture and design, overfly crop fields or terrain for agriculture and geological survey and through corridors or around ruins for search and rescue operations.

“In contrast with flight simulators, Drone Prix AR provides a much more immersive experience that combines virtual obstacles with real-life piloting skills,” Haskin said, stressing the potential of AR for pilot training. Augmented reality can be used on anything that has a camera to provide the viewer more information overlaid atop the view.

With AR, flight guide paths could be programmed for automated routes through complex regions, such as between buildings or trees, with flight tolerances learned by software by recording the movements of pilots. In terms of building inspection, AR could be used to give a pilot a visual highlight of the wall, window or feature in need of investigation helping the pilot find it more quickly.

DJI is no stranger to the possibility that AR might become the next killer app for expanding the business of drones and provided a software development kit that makes developing applications easier.

“DJI’s support for the startup and developer communities has not only meant the creation of new usage applications, but also new business opportunities,” said Taehyun Moon, DJI’s director of brand management.