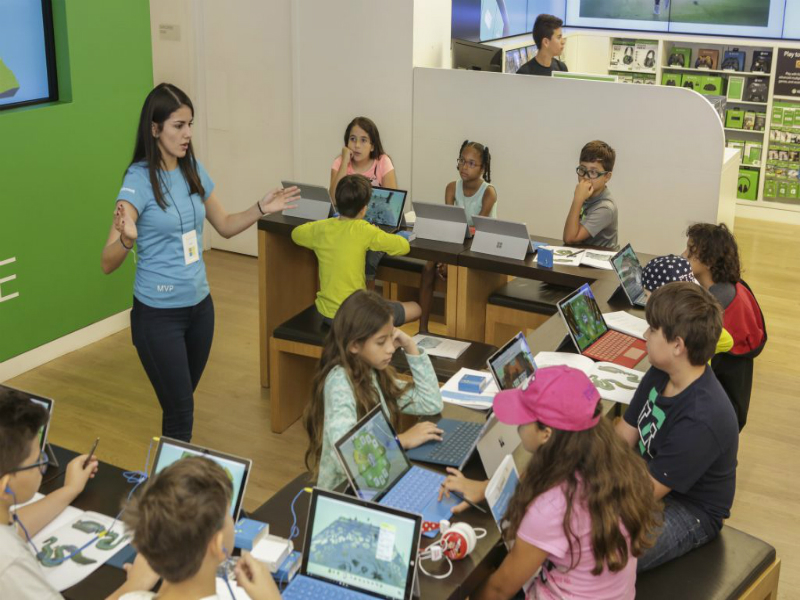 Microsoft Corp. held a strong position in classrooms before Chromebooks and Apple Inc. iPads came along and started to dominate. According to Google Inc., Chromebooks and its education app Classroom are used by more than 20 million teachers and students.

Microsoft is looking to get a stronger footing in the classroom once again with the announcement of various new features for teachers and students, as well as new hardware and operating systems. Microsoft Tuesday announced a new Surface Laptop, Windows 10 S, 3D and Windows Mixed Reality for the classroom and more at its Microsoft Education event in New York City.

The Surface Laptop has a 13.5-inch PixelSense display with a 3:2 aspect ratio. “This is the thinnest LCD touch model ever created and put into a laptop,” said Panos Panay, corporate vice president of Microsoft Devices, at the launch event. The device is 14.47mm at its thickest point and weighs 2.76 pounds, less than a 13-inch MacBook Pro. It has a touch screen that is compatible with the Surface Pen.

Microsoft is using the latest 7th Generation Intel Core i5 and i7 processors, up to 16 gigabytes of RAM and up to 512 GB of storage. The device has a claimed battery life of 14.5 hours thanks to Windows 10 S. According to the company, it has “more battery life than any MacBook Air on the market today.”

The Surface Laptop comes in a range of four colors: platinum, gold, cobalt blue and burgundy. While the Alcantara-covered keyboard will match your chosen color.

Microsoft also introduced a new mouse at its event to go with the Surface Laptop. The Surface Arc Mouse has the familiar travel-friendly design that snaps flat for easy storage and connects via Bluetooth. What is new is the touch-sensitive button that replaces the left and right buttons and the scroll strip.

The Surface Arc Mouse is available for pre-order from the Microsoft Store for $80 and will ship on June 15. Available in three color options: light gray, burgundy and cobalt blue.

Microsoft has also announced new software for the classroom. Windows 10 S, which will be loaded on the Surface Laptop, will feature more security, faster load times and faster start time. Devices loaded with Windows 10 S will have better battery life while performance won’t degrade over time, according to the company.

These improved features come at a slight disadvantage as users will only be able to run apps from Microsoft’s app store, as they have been “tested and verified,” according to the company, unlike apps downloadable from other websites.

If users want more than the limited Windows 10 S they can upgrade their operating system to Windows 10 Pro. The upgrade to the Pro edition will cost $49.

Note: Once you upgrade from Windows 10 S to Pro, you won’t be able to revert back.

In addition to the Surface Laptop, various other devices will also run Windows 10 S on their devices aimed at the classroom. Microsoft’s partners, including Acer Inc., AsusTek Computer Inc., Dell Technologies Inc., HP Inc. and Samsung Electronics Co. Ltd., will release Windows 10 S devices, starting at $189, over the coming months.

The company announced its recently launched enterprise chat tool Microsoft Teams will be available in a limited preview for the classroom and will be generally available in the summer.

Code builder for Minecraft will introduce coding to students, allowing them to write code to move, build and create in the game. Minecraft will be integrated with platforms like Tynker and ScratchX, as well as Microsoft’s own MakeCode open-source platform to teach JavaScript.

Microsoft has partnered with Pearson Education Inc. to integrate 3D and mixed reality into the company’s secondary- and university-level curriculum. By the school year 2018, Pearson will offer curriculum in health, commerce, history and STEM, on all Windows Mixed Reality devices.