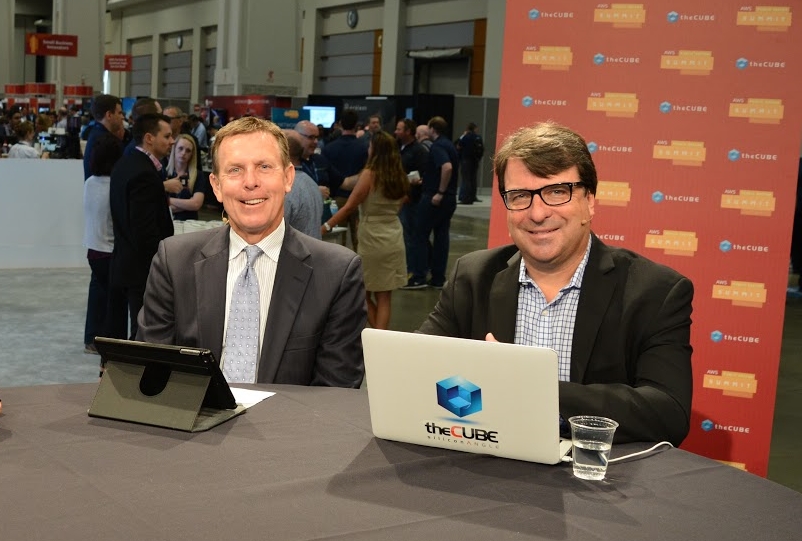 Can government agencies use cloud technology to spiff up service applications and speedily cut bureaucratic red tape (without accidentally hitting the big red button in their haste)?

“You’ve got, obviously, this treasure trove of an asset in public data that can be used to improve any number of services; at the same time, you’ve got major security concerns,” said John Walls (@JohnWalls21) (pictured, left) co-host of theCUBE, SiliconANGLE Media’s mobile live streaming studio, during AWS Public Sector Summit in Washington, D.C. (* Disclosure below.)

The user-friendliness of consumer-facing apps is bleeding into enterprise employee interfaces and applications, according to Furrier. Is the logical next step for government agencies to become more like enterprises, increasing the rate of change and adaptation to demographics’ desires?

It may be possible with cloud services as long as data governance and security is provided for at the outset, Furrier stated. “Centralized governance, enforcing policy compliance around the data and cloud operations at scale — that’s really the key,” he said. “There’s a lot of cases where, with the data being exposed, government innovation really thrives, and that’s going to come from the developer community. And that creativity cannot be realized without exposing the data, without creating massive amounts of compute.”

Still, public sector agencies cannot just break out and start running like enterprises merely because they buy a cloud subscription, Walls stated. “I’ve got a different board of directors; I’ve got congressional oversight — they have budgetary control; I am year-to-year, and I don’t have quarterly board meetings; sometimes we get stuck in the whole appropriation process — that in itself is a morass,” he said.

Like it or not, online disruption is pressuring the public sector to innovate, Furrier stated, sharing an anecdote about his own son learning from YouTube robotics videos.

“You’re seeing the eLearning impacting education. What does that mean for education? That means they’ve got to be more competitive,” he said, adding that this means plainly: “Build better apps.”

Watch the complete video interview below, and be sure to check out more of SiliconANGLE’s and theCUBE’s independent editorial coverage of the AWS Public Sector Summit.