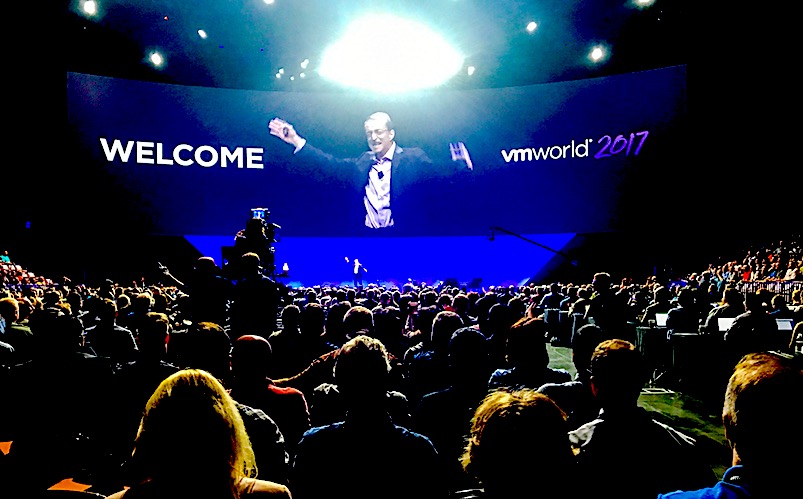 As we have every year since 2010, Wikibon and SiliconANGLE Media’s video unit theCUBE descended on VMworld in force. After a few days of an analyst summit, 50 briefings, and close to 130 interviews on theCUBE, we left thinking, “What a difference two years makes.”

Way back in 2015, VMware Inc.’s license revenue was flattening, its cloud strategy was confusing and people were speculating that Chief Executive Pat Gelsinger (pictured) was on his way out. Today, VMware is approaching $8 billion in annual revenue, with nearly 14 percent license revenue growth, almost $3 billion in annual free cash flow, 33 percent operating margins and a highly capital-efficient business model.

What changed? We believe there are three main factors fueling VMware’s resurgence:

Cloud clarity. The deal with Amazon Web Services Inc., announced last year on the heels of VMware’s confusing vCloud Air strategy, pointed customers in a clear direction: VMware was going to partner with and embrace the leading public cloud player and deliver its rich data center services in a true cloud model.

CIO realities. Organizations have come to recognize that they cannot re-form their business and shape it to fit into the public cloud. Rather, the sensible strategy is to bring cloud operating models to their data, wherever it resides. VMware is a leader in what Wikibon refers to as True Private Cloud, a solution category that substantially mimics the public cloud on-premises, and customers are buying in.

Product cycles. Those two factors have given customers more confidence to enter longer-term and lucrative enterprise licensing agreements with VMware. The company’s core compute business is showing continued strength (about 10 percent growth), its end-user computing business is very steady (up 20 percent) while emerging offerings in software-defined networking (up 40 percent) and storage (up 150 percent) are exploding. Combine these factors with a fresh share repurchase program and a $4 billion offering of cheap debt, and it’s no surprise that the stock has more than doubled over the past year and a half.

VMware is on fire and the data center is booming – Dave Vellante, Wikibon

With that as background, a few things stood out:

Hybrid cloud. The star of the show was hybrid cloud, headlined by the duo of Amazon Web Service Inc. and VMware. Called “VMware Cloud on AWS,” the offering is based on VMware’s Cloud Foundation Software-Defined Data Center product, which combines vSphere, VSAN, NSX and the vCenter management platform. Available initially in AWS’s U.S. West region, the service will be extended to other AWS regions worldwide in 2018. It’s a VMware service that will be resold through several select partners to start. As Wikibon wrote when the VMware/AWS deal was first announced in October 2016, this offering is going to attract a lot of interest from enterprise customers because it promises the ability to move virtualized workloads between on-premises servers and the AWS cloud. We believe it guarantees a three-way platform horse race among Microsoft Corp., Linux and now VMware.

Open, with an opinion. From the top (Michael Dell) on down, the Dell EMC mantra is become “Open, with an opinion.” What does it mean? It means all of Dell will work to improve the value of its portfolio to customers but remain partnership-friendly. It isn’t just talk. Hewlett Packard Enterprise Co., IBM Corp., Nutanix Inc. and a slew of other technology providers made strong cameos at VMworld.

A practical focus on differentiated simplicity. How will Dell EMC improve the value of its portfolio to customers? Well, we didn’t hear a lot of talk about bundled discounting or closing technology borders. What we did hear – and, more importantly, saw – was great progress on combining VMware and Dell EMC into engineered packages, such as Cloud Foundation, that promised compelling lower operating, maintenance and enhancement costs. For example, the Dell EMC Ready Solutions is generating a lot of buzz among infrastructure packaging aficionados (yes, they do exist). While we still like Oracle’s “paths to the cloud” approach, Dell EMC has made great strides since the merger combining the configuration focus of Dell with the enterprise product breadth of EMC.

Further evidence that storage is the new CPU. In relatively few years, VMware has evolved from an approach to simplifying server management and procurement to a kit for simplifying and improving information technology infrastructure overall. No product has been more important to that transition than vSAN. Arriving at about the same time as flash storage, it has been adopted by more than 7,000 enterprises as the basis for building enterprise-class server storage area network systems  — and, according to VMware, 100 new enterprises are coming onboard every week. It’s a huge market that will approach $6 billion in 2017 and grow nearly 22 percent per year for the next decade or so – and VMware vSAN is a major force, generating about $350 million in spending across the VMware ecosystem. The 6.6 version of vSAN is a major new release, adding significant enhancements in data protection, intelligent operations and simplified hyperconverged infrastructure packaging.

Making nicer with containers – and Google. One domain we expected to hear a lot about was VMware and containers – and we weren’t disappointed. When last year Pivotal and Google “pointed BOSH at Kubernetes to create Kubo,” we expected it might end up on the main stage at VMworld. And it did in the form of Pivotal Container Service (PKS, picking up the K from Kubernetes, we suspect). For companies with heavy investments in vSphere that they want to extend to container technology and related methods, PKS appears to be a first-rate approach to deploying Kubernetes clusters within the Google Cloud Platform. Expected to be generally available in the fourth quarter, the initial release of PKS will include Kubernetes on BOSH, with NSX and Open Services Broker API integration.

Multicloud integration. One thing we noticed: Peel back many of the most interesting VMware and other ecosystem member announcements and what you find staring back at you is: NSX, VMware’s network virtualization technology. The events, storylines and roadmaps that included NSX are too numerous to mention, but we’ll say this: Platform wars are coming, and technologies for cloud internetworking are going to be crucial to user and vendor success. One chief information officer we spoke with told us, simply, that his shop will evaluate future infrastructure technologies on two criteria: how well a technology demonstrates that it can bind with other platforms and how easily a technology can be fit into automation regimes. NSX in many respects is VMware’s baseline for each of these criteria. It was a big story at VMworld 2016, bigger in 2017, and we think its importance will be even greater over the next few years.

Action Item. VMware is – and will remain – an essential enterprise technology for at least another two technology generations. As we anticipated, VMworld 2017 emerged as a watershed moment in the history of IT infrastructure. The VMware family is a bridge from the recent virtualization past to the near cloud-based future.