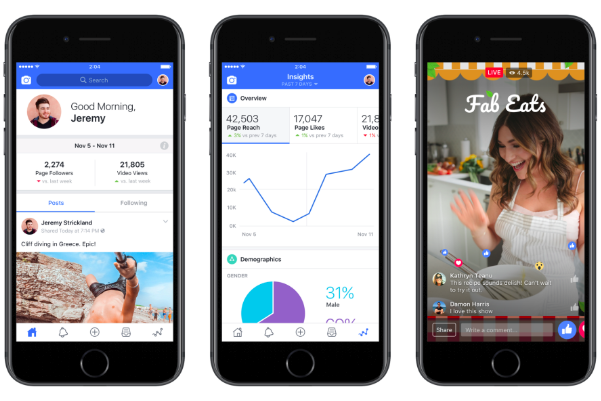 In its attempt to encourage more original video content on its platform, Facebook Inc. today introduced a new Creator app, which will help people create, brand and share original videos.

Facebook has been focused on spending more money on original video content this year, but unfortunately for the company, it has also been under fire this year for spreading fake news on its platform. The recent announcement that it was joining a new initiative called The Trust Project together with other tech giants is aimed at alleviating that problem.

The Creator app follows Facebook’s recent introduction of Watch, a dedicated tab where users can watch original videos. In addition, the company’s acquisition of Source3 earlier this year will be used to detect pirated content. Taken together, the moves are a clear attempt to take on Google LLC’s massive YouTube video service.

Facebook announced the Creator app at VidCon in June. The app isn’t completely new and is actually a rebranded and updated version of Facebook’s Mentions app, which the company introduced in 2014. The Mentions app, however, was only available to verified public figures and Pages. The “new” Creator app will now be open to everyone and is launching globally today on iOS, with an Android version set to be available in “coming months.”

The new app could lure creators away from the likes of YouTube, but it’s still missing a big draw: ways for creators to make money from their content. Facebook is exploring different monetization business models, according to Fidji Simo, vice president of video product at Facebook.

Creators can also replace one of the default reactions (such as angry, ha-ha, wow, sad or happy) with a custom reaction of their choice. While the new graphic frames, allow creators to add a specific border to their video.

Creators will also have easy access to insights within the Creator app. These insights will include analytics about a creator’s Page, video and fan demographics.

Facebook has also launched a new website called Facebook for Creators. A source of information for creators, Facebook for Creators will provide tips on how to create great videos, show what other video creators are doing and provide answers to frequently asked questions.

Creators can also join the Facebook for Creators community, which will allow them to be considered for early access to new features and tools.