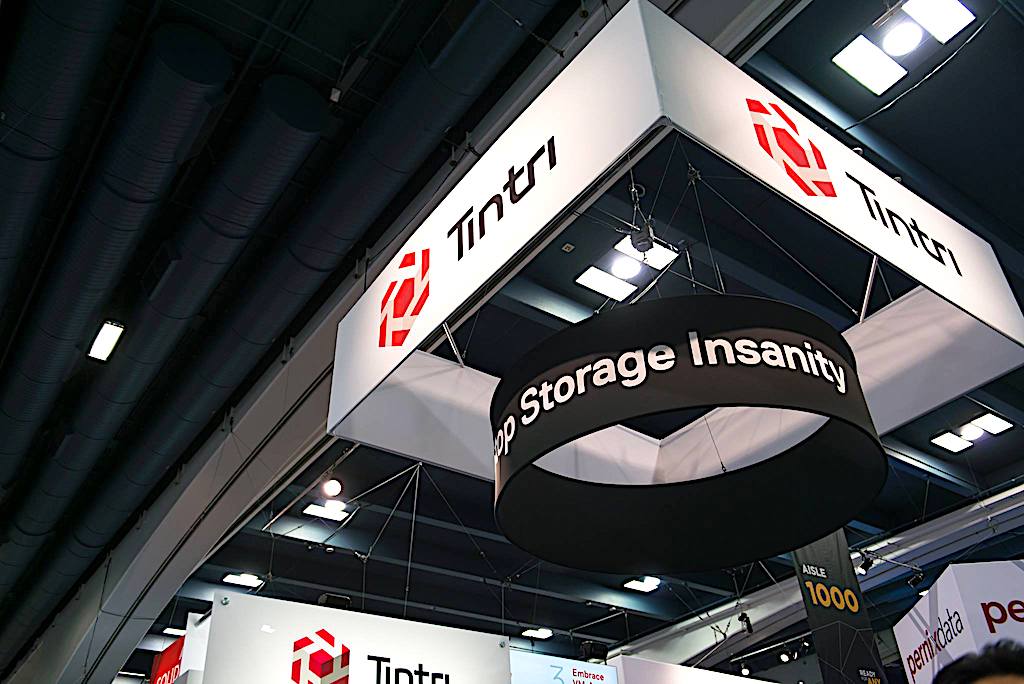 Less than 6 months after its IPO, storage firm Tintri considers selling out

In a surprise move, the Mountain View, California-based company said during its third-fiscal-quarter earnings conference call that it’s looking at a potential sale or options to reduce its cash burn significantly. “We are exploring strategic options available to the company to deliver value to our stockholders, including retaining investment bank advisors to assist us in this process and optimizing our operating model to reduce our cash burn rate and shorten the time to generate positive cash flow,” Chairman and Chief Executive Ken Klein said in a statement.

Shares of Tintri plunged as much as 14 percent in after-hours trading, though later after the earnings call, shares were up 0.36 percent. They had fallen by the same fraction in regular trading, to $5.48 a share. After another disappointing quarter reported in September, shares had plummeted 13 percent.

The nine-year-old company makes storage appliances using all flash-memory chips. They’re intended for virtual machines, or computers emulated in software, and software containers, which bundle an application and other software so it can run on multiple computer operating systems as needed. Both are ways to save money and provide more flexible data center setups in the rapidly developing cloud computing era.

In its quarter ended Oct. 31, Tintri reported revenue fell 6 percent from a year ago, to $31.8 million. That was far below the $36.6 million analysts on average had forecast.

For the fourth quarter, Tintri forecast an adjusted loss of 79 to 83 cents on revenue of $25 million to $27 million. Analysts were modeling 68-cent loss on revenue of $42.9 million.

Klein blamed the shortfalls on delayed and reduced purchases by some accounts, though he added that some of those delayed transactions closed in November. During the earnings call, oddly, analysts didn’t ask about the potential sale of the company, but they did have many questions about sales momentum.

“Many of the purchase delays that we’ve seen stem primary from concerns about the strength of our balance sheet, which we are addressing, and to a lesser extent realignment of our sales force, which naturally takes some time,” Klein said, adding that the main shortfalls in revenue came from midsized customers who have bought between $400,000 and $1 million worth of products. “We believe that our model can be fully funded through cash generation.”

Analysts and investors were downbeat on Tintri even before its IPO, though it’s unusual for a company to consider selling out so soon after going public. The company faces heightened competition from both traditional storage companies and younger upstarts, many of which are rapidly consolidating into bigger entities.

For one, NetApp Inc. acquired all-flash storage provider SolidFire in early 2016. Then there was Dell Inc.’s massive acquisition of EMC Corp. that closed in September 2016. In February, Hewlett-Packard Enterprise Co. acquired SimpliVity Corp., a developer of competing hyperconverged systems. And in April, HPE struck another blow by buying Nimble Storage Inc., another all-flash storage provider, for more than $1 billion.

Tintri had raised $61 million in its IPO June 30, but the $7-a-share price at which it debuted, down from its planned range of $10.50 to $12.50 a share, gave it a valuation of only $216 million. That was far below the $785 million valuation in its last venture capital round in July 2015. At the time, co-founder and Chief Technology Officer Kieran Harty told Fortune explained the so-so reaction of investors to other enterprise infrastructure companies that weren’t doing that well. “It is kind of like being in a good house in a bad neighborhood,” he said.

Before the IPO, Tintri had raised more than $260 million, including a $75 million round in early 2014, a $125 million funding in August 2015 and a secondary round of an undisclosed amount in January.