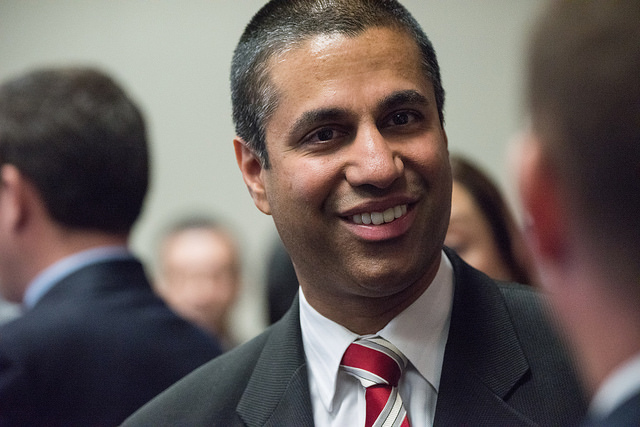 The man who controversially once said he would take a “weed whacker” to former net neutrality regulations has met with fierce resistance since from consumers and activists and much of the world’s media. But CES hosts the FCC’s chairman annually thanks to the agency’s prime role in policies concerning consumer electronics devices, so his absence would be unusual.

Since the commission voted to repeal so-called net neutrality rules, resistance has solidified, with the FCC expected to find itself involved in a number of legal battles in 2018. But other than legal threats, Pai has also received physical threats. In December he had to cut short a speech after his security received information about a bomb.

The current threat that will mean no FCC chairman will give his annual CES chat, a change that was confirmed on Wednesday. Speaking to Recode about the matter, a spokesperson for Pai refused to discuss security concerns, and CES officials said only that Pai “is unable to attend CES 2018.” It was sources speaking to Recode that said Pai’s cancellation was thanks to death threats.

The Consumer Technology Association, which organizes CES, had earlier said that Pai planned to chat with its President Gary Shapiro about “connectivity, spectrum issues, Next Gen TV, developments in broadband and competition policy, and a recap of the chairman’s impactful first year.”

Still, the FCC will be well-represented at the event. Acting Federal Trade Commission’s Chairwoman Maureen Ohlhausen will still take the seat next to Shapiro, while FCC Commissioners Brendan Carr, Mignon Clyburn and Mike O’Rielly will also attend the show and give speeches.

Others have been more cynical about Pai’s no-show, saying that he has ulterior motives for not attending. Jeremy Kaplan, editor in chief of Digital Trends, tweeted that Pai “realized that the tech industry kinda despises him.”

In an interview with Digital Trends, Shapiro did not expressly say why Pai had canceled but he did say that Pai and his family “have been subject to vicious and direct attacks and threats” in the past.

FCC Chairman @AjitPaiFCC is a no show for #CES2018. I imagine he would’ve gotten a lot of pointed questions…

This will be the first time Pai has not attended the conference in five years.