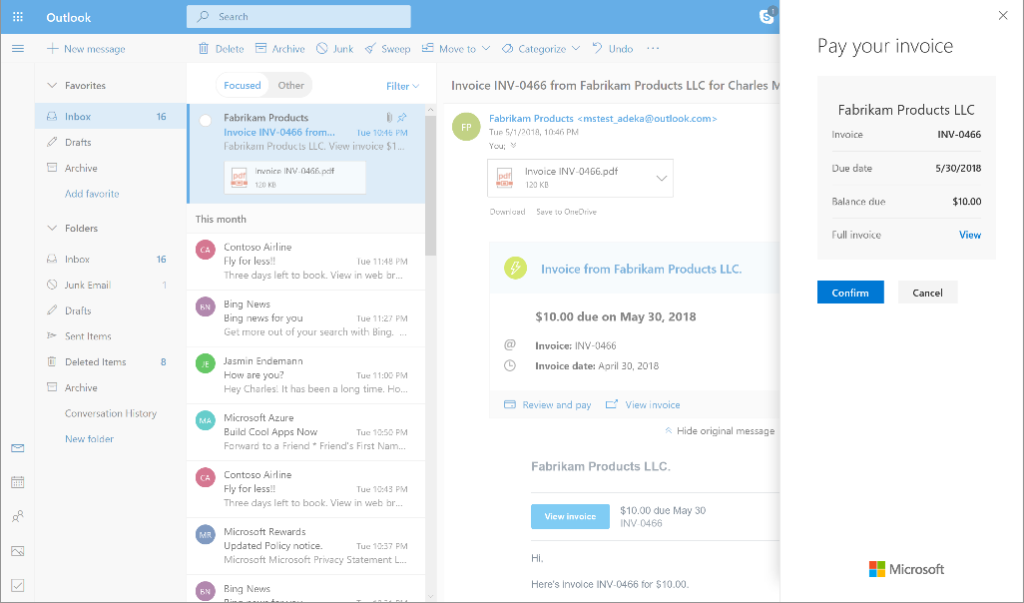 Despite the lack of a viable mobile phone platform, Microsoft Corp. is doubling down on its efforts to grab a piece of the online payments market by providing Outlook support for Microsoft Pay, previously known as Microsoft Wallet.

The service will allow users to settle invoices within Outlook itself. In one example given by the Microsoft, an Outlook user receives an invoice from a company via email, and that invoice can be settled using Microsoft Pay within Outlook itself, but only if the person who sent the invoice is using Outlook as well.

“As a result, end users can approve expense reports or comment on an issue in GitHub directly within an Outlook email or Teams chat,” Microsoft said in a blog post. “Building on Adaptive Cards, we’re also bringing payments to Outlook. With Microsoft Pay, you’ll be able to quickly and securely pay bills and invoices right from your inbox.”

Along with the added support for Microsoft Pay, Microsoft also announced that Adaptive Cards will allow “every business process – and any service that sends a notification – [to] immediately benefit by adding adaptive cards directly into emails, bots and Team chats.  Adaptive Cards are now supported for Actionable Messages within web-based Outlook clients, and will soon be supported in Outlook 2016 for Windows. ”

Behind the technology is the ability to now use JavaScript Object Notation or JSON markup in the body of an email, including support for HTTPS endpoints to handle actions.

How many people use Microsoft Pay is not clear, but user numbers for competing services such Samsung Pay, Apple Wallet and various others, with the exclusion of PayPal Inc., are believed to be low. Extending its own service is a step forward for Microsoft in encouraging adoption, but it’s unlikely to change the overall payment landscape.