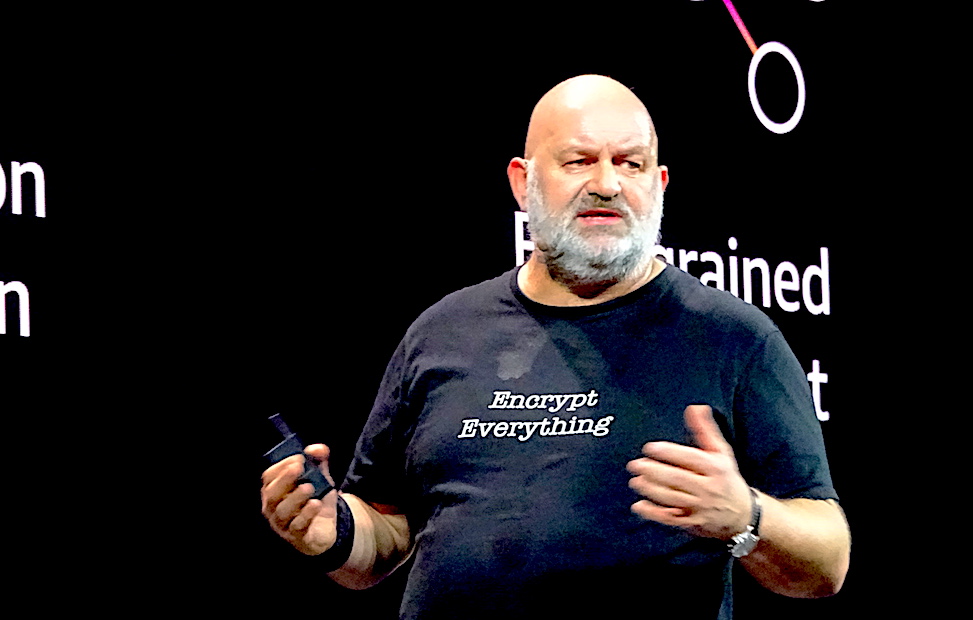 Security was arguably the headliner of the one-day conference in Santa Clara, California, which attracted some 6,500 AWS customers and partners. And many of the exhibitors in the expo hall were cybersecurity providers aiming to provide the many companies venturing into the cloud with a little assurance that they can keep their customers’ data, and their own, safe from attackers.

“Security needs to become everyone’s job,” said Werner Vogels (pictured), Amazon.com’s chief technical officer, who wore a T-shirt that read “Encrypt Everything” during his two-hour keynote. “We as technologists need to take responsibility that we keep our customers and businesses secure.”

Vogels’ concern about security comes at a time when enterprise hacking via social engineering has become more prevalent as criminals have grown increasingly sophisticated in their ability to generate realistic phishing emails. All it takes is one unsuspecting user to click on a malware-loaded link and the threat actors are in.

AWS has not been completely immune from malicious mischief. A vengeful former employee of a customer was recently sentenced to jail for trashing AWS accounts using a stolen credential. A 2018 report by RedLock documented the compromise of a Kubernetes server in AWS to mine cryptocurrency. One security researcher recently published findings on how to attack an AWS account through a Lambda function that allowed execution of shell commands.

AWS can read headlines too, and Vogels made a point to remind conference attendees of the wide range of security tools available for users. These include solutions such as Amazon Inspector, which continuously scans code and can ensure compliance as well. The company also offers AWS CloudTrail, which monitors cloud usage logs and records API calls.

“There’s a whole collection of AWS security tools around automation that you all should be using,” Vogels said. “Given that we’ve built encryption into almost all AWS services, make use of it.”

There’s also a raft of partners working with AWS to provide more security tools — and many of them are using AWS services to create and provide them.

Workload identity technology startup Aporeto Inc., for instance, had originally used its own version of Kubernetes but told SiliconANGLE that it’s in the process of migrating to Amazon’s EKS managed Kubernetes service. Likewise, network security startup Blue Hexagon Inc. uses AWS’ compute engine to power the training of its deep learning neural networks as well as EKS, AWS’ Lambda “serverless” technology for automating the provisioning of cloud machines, and other services. “Without that, it would have been six more months” to create Blue Hexagon’s service, CEO Nayeem Islam said in an interview.

AWS’ rapid growth has stemmed from how fast the company has rolled out new products and services, and Wednesday was no exception on that front. AWS Deep Learning Containers will include packaged artificial intelligence and tools for deployment on various compute instances. The company also provided details on an automation tool for its Redshift data warehouse called Concurrency Scaling. “Redshift is now 10 times faster than it was two years ago,” Vogels said on Wednesday.

Such developments are attracting more new customers to the AWS fold. In addition to announcing that Standard Bank Group, the largest African financial institution by assets, would migrate its production workloads to AWS, Volkswagen AG declared that it would join forces with the cloud provider to build a new Industrial Cloud, using data gathered from all 122 of its automotive plants.

That’s in addition to rising use of Amazon’s cloud by other large enterprise customers. McDonald’s Corp., an AWS customer, is servicing 20,000 orders per second through AWS-powered microservices using containerized technology. Expedia’s HomeAway vacation rentals service is uploading six million images per month using AWS’s Lambda serverless computing platform. And Ellie Mae, which processes 40 percent of all mortgages in the U.S. according to Satheesh Ravala, the company’s senior vice president of cloud engineering and operations, will go “all in” with the public cloud provider by next year.

Following up on a multitude of announcements made during its re:Invent conference in November, AWS also declared general availability for a host of products, including App Mesh, Toolkit for IntelliJ and Glacier Deep Archive.