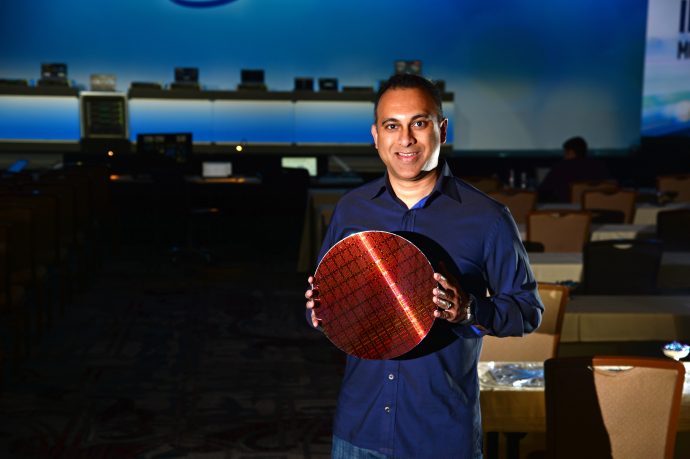 Intel Corp. today launched a new version of its market-leading Xeon Scalable processor series for servers, along with a pair of more specialized products designed to power other parts of enterprises’ technology infrastructure.

The new Xeons account for the bulk of the additions, with the chipmaker set to bring no fewer than 56 chip models to market as part of the product refresh. Sitting at the top of the performance totem pole is the Xeon Platinum 9200. The processor will ship in three editions, the most powerful of which packs 56 cores that run at a base frequency of 2.6 gigahertz and can go as high as 3.8GHz.

The Platinum 9200 represents a significant upgrade over Intel’s earlier processors. Navin Shenoy (pictured), the head of the chipmaker’s data center group, said it provides an average of 33% more computing power than previous-generation Xeon Scalable units. That’s a significant jump, especially given how both generations are based on the same 14-nanometer manufacturing process.

The other Xeon models that debuted today range from eight to 28 cores. All the new processors, including the Platinum 9200, feature a new technology called Deep Learning Boost. It introduces extensions to the machine language in which the chips express processing tasks that allow them to run artificial intelligence models much faster than earlier units.

“The combination of hardware and software improvements means this new Intel Xeon Scalable platform delivers up to 14X deep learning inference performance versus first-gen Intel Xeon Scalable processors released in July 2017,” Lisa Spelman, Intel’s vice president for the the Xeon product line, wrote in a blog post. “With our Intel Xeon Platinum 9200 processors, a new family of advanced CPUs, we can deliver double that performance.”

Patrick Moorhead, president and principal analyst at Moor Insights & Strategy, told SiliconANGLE that the midrange Xeon performance boost was surprising and could put it in a better competitive position. “The second-gen Xeons also support Optane Persistent Memory, which for applications like SAP HANA, could radically improve TCO and speed and could become a future ‘no-brainer,'” he said. “I believe Intel Xeon’s new tuning and management capabilities like Speed Select and Resource Director will strongly accepted by cloud and communications service providers.”

The refreshed processor family is joined by a brand-new chip series Intel is marketing under the name Agilex. It consists of field-programmable gate arrays, customizable processors that companies can load with instructions optimized for their applications.

Intel will produce the chips using a 10-nanometer process that’s newer and more efficient than the 14-nanometer architecture on which the Xeon line is based. That’s clearly reflected in Agilex’s specifications. Intel claims that companies can configure the chip to either to provide 40% more computing power or use 40% less than its earlier FPGAs.

Intel sees the Agilex line being applied for a wide range of use cases. According to the company, the chips can provide an external speed boost a server’s processors, support network equipment and provide devices running at the edge of the network.

This latter market is a particularly big focus for Intel. The chipmaker offers several different processors for manufacturers building edge devices, a selection it has also expanded today as part of the broader portfolio refresh. Intel is launching a new system-on-chip series dubbed the Xeon D-1600 that provides two to eight processing cores in a compact, power-efficient form factor.

“Overall, it was hard to ignore that Intel has become a full datacenter technology provider with huge investments in compute, storage and networking,” Moorhead said “It’s all-in on heterogeneous compute across CPU, GPU, FPGA and ASICs. This is the new Intel.”