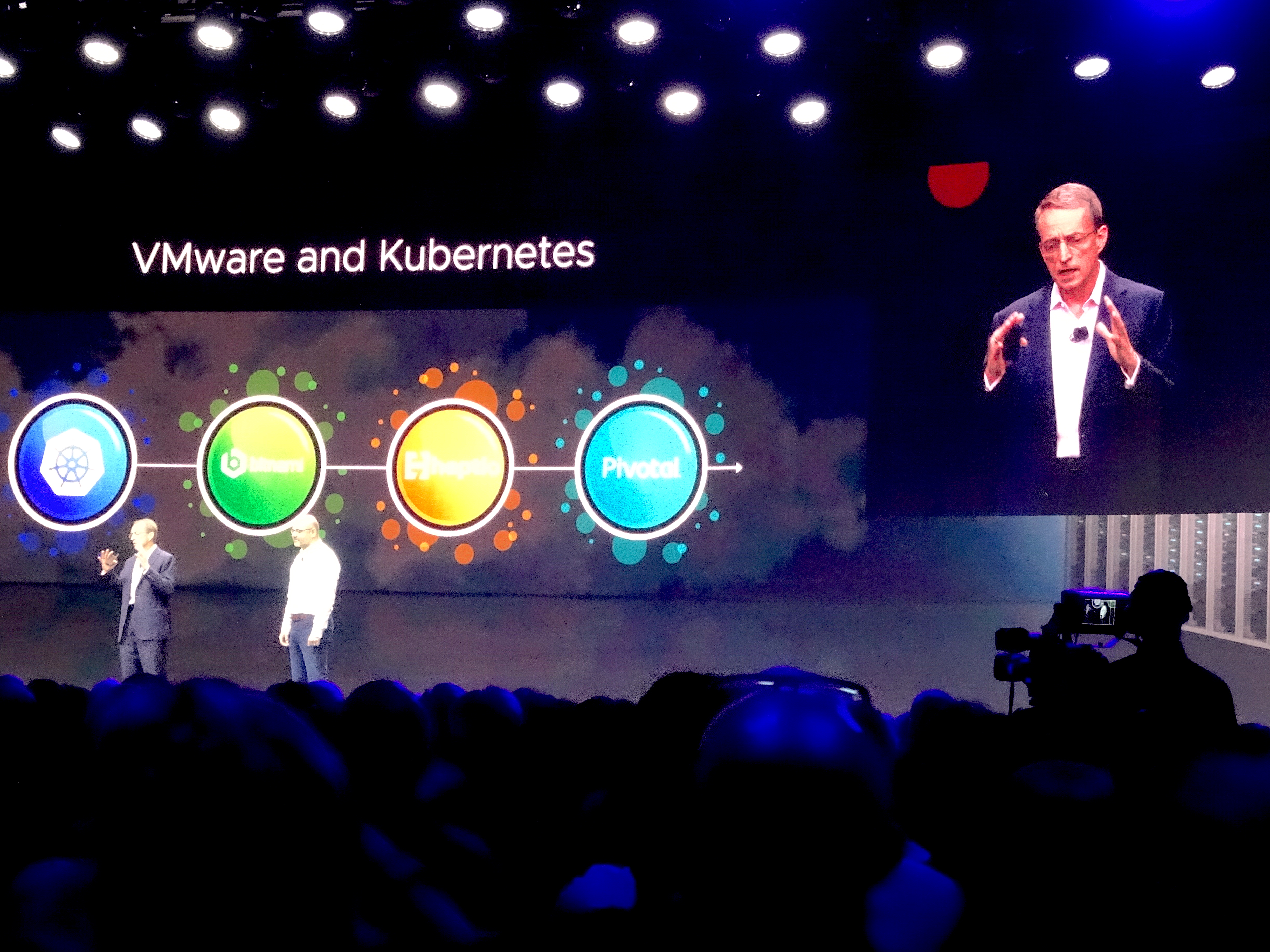 At VMworld, VMware bets big on convergence of virtual machines and containers

VMware Inc. made a wide range of announcements this week that advance its competitive positioning in multicloud computing.

One of those announcements stands out as a classic “bet the business” gambit: the “Project Pacific” core of the company’s forthcoming Tanzu Portfolio.

Launched in the Day One keynote at VMworld 2019 in San Francisco, “Project Pacific” will embed Kubernetes into the control plane of a future release of vSphere, which is VMware’s flagship server virtualization platform. Specifically, Project Pacific will add a container runtime into the vSphere hypervisor, while new ESXi native pods will combine the best properties of Kubernetes pods and VMs to boost the runtime’s security and performance on mission-critical workloads.

Betting on the convergence of virtual machines and Kubernetes

In addition, VMware Tanzu Portfolio, still in limited preview, will provide a single point of control from which customers will consistently monitor, manage and enforce policies on workloads across all Kubernetes clusters wherever they run in a multicloud. Tanzu’s “Mission Control” console will allow developers to use vSphere tools to deliver applications to Kubernetes clusters.

By the same token, the tooling will use Kubernetes application programming interfaces to access VMware’s software-defined data center virtualization infrastructure throughout hybrid and multiclouds. And it will present DevOps personnel with a consistent view of Kubernetes constructs in vSphere.

VMware did not provide a specific general availability date for Tanzu, so customers will have to participate in the limited preview to assess how well the company has implemented these features. But there’s no doubt that VMware is quite committed to ensuring that this new capability integrates seamlessly into its multicloud solution portfolio without delay. The company has every interest in migrating its huge enterprise customer base’s applications and workloads from virtual machines to multicloud-ready containerized formats.

Pinning its growth prospects on migrating customers to Kubernetes

Kubernetes by itself is no differentiator for VMware in the cloud market. But to the extent that VMware can migrate customers rapidly to Kubernetes backplanes, it can cross-sell those accounts on its growing multicloud solution portfolio and thereby stoke fresh revenue opportunities over the coming decades. And it can do this before rival container/VM convergence frameworks — including Amazon Web Services’ Firecracker and the Cloud Native Computing Foundation’s KubeVirt project — have a chance to gain traction with solution providers and users.

Looked at in this strategic context, Tanzu provides a hook for understanding the “bet the business” significance of other recent VMware announcements, including several that hit the wires this week at VMworld 2019. Kubernetes is central to practically every strategic direction addressed through VMware’s recent announcements. Taken as a whole, they show that VMware is trying to make enterprise migrations of VM workloads to multicloud Kubernetes environments as rapid and painless as possible.

Chief among VMware’s bets on Kubernetes are the following recent announcements:

Even in advance of Tanzu’s availability, VMware has become a cloud “lift and shift” powerhouse. As Mark Lohmeyer, senior vice president of the company’s Cloud Platform Business Unit, said on camera this week on theCUBE (below): “One of the compelling new options that we’ve enabled for customers with VMworld Cloud on AWS is that we could take a migration project that would have previously taken three years and we could do it in a few months.”

Going forward, the strategic worst-case scenario for VMware would be if it were unable to provide solutions that simplify customer “lift and shift” of VM workloads to a Kubernetes backplane that it helps them manage.

Under such a scenario, VMware could find it difficult to cross-sell customers on premium application and content services, such as artificial intelligence, that it will need to challenge the likes of Amazon Web Services Inc., Microsoft Corp., Google LLC, IBM Corp., Cisco Systems Inc., Hewlett Packard Enterprise Co. and others in the burgeoning multicloud segment.

“The big thing we’re focused on going forward is really this modernization kind of piece of the story,” Lohmeyer said. “How do we enable Native Kubernetes in the service? How do we enable ML and AI workloads in this service? How do we do a better job of connecting to all of the AWS services? So, you’re going to see a big kind of focus, there. Beyond VMware Cloud AWS, I mean we’re really excited about bringing this VMC model back on Prem both with Dell and on top of AWS Outposts.”

What, if anything, could prevent VMware from migrating customers’ VMs to Kubernetes — and in the process, diminishing such cross-sell opportunities – -in coming years? The most obvious threat is if customers begin to regard VM workloads as legacy applications that are unworthy of migration or, to the extent they require modernization, are more efficiently lifted and shifted using alternative commercial or open-source tools.

So far, that’s not a serious threat, thanks to the continued popularity of VMs. Indeed, VMware has recently seen a rapid expansion of VMs deployed on VMware Cloud on AWS. “We’ve increased the number of customers by 4x on the service,” Lohmeyer noted. “We’ve increased the numbers of VMs on the service by 9x. It shows you that we’re adding both new customers as well as existing customers are expanding their investment. And it’s powered by a lot of the compelling use cases.”

Another possible future scenario that might slow customers’ migration of VMs to Kubernetes is if VMs gain a new lease on life in the cloud-native world. Some observers see VMs in some form remaining a core piece of the Kubernetes-dominated cloud-native landscape, providing stricter multitenant application isolation.

In fact, there are already alternatives to Tanzu’s Project Pacific that enable VMs and containers to coexist. In addition to the open-source KubeVirt, which orchestrates traditional VM-based workloads alongside container-based workloads, there are such commercial alternatives as AWS’ Firecracker and Fargate, Google’s gVisor and Intel Corp.’s Kata containers, all of which provide container services nested in micro-VMs.

And there’s an obvious self-defeating risk implicit in VMware’s Tanzu strategy: deploying a cloud-native application platform in which VMs and containers can coexist indefinitely. If VMware’s customers can protect their investments in vSphere’s hypervisor and VMs, the company may inadvertently slow its customers’ migration to a completely Kubernetes-dominated application backplane.

And it appears that VMs do indeed have a long shelf life in enterprise clouds, and may make the transition smoothly to muticlouds. “I think one of the really interesting opportunities that we’ve opened up for customers with VMware Cloud on AWS is you don’t necessarily have to re-factor everything just to be able to get to the public cloud,” Lohmeyer said. “We could help them migrate to the public cloud very quickly without requiring any changes if they don’t want to. And then when they’re there, they can modernize at their own pace based on the needs of the business. So I think having that additional option is actually quite useful for customers that want to get to the cloud quickly and then from there begin to modernize.“

Wikibon recommends that VMware customers participate in the limited preview of Tanzu Portfolio’s Project Pacific. Their chief criterion should be whether this solution, whose general availability is still indefinite, can be useful in VM/container coexistence, convergence, and migration initiatives. For those VMware customers that are already well underway with Kubernetes deployments in multiclouds, this future solution, in conjunction with new ESXi native pods, could help boost security and performance on mission-critical workloads involving containers and VMs.

With regard to the other VMware announcements related to Kubernetes, Wikibon encourages enterprises to evaluate those as soon as possible, since they provide a comprehensive suite for the most demanding multicloud DevOps requirements. These announcements reinforce what Wikibon has been saying about VMware’s central role in the multicloud arena.

In the race to migrate enterprises’ workloads from on-premises platforms to their respective clouds, the leading public cloud providers have each enlisted VMware as their strategic “lift and shift” partner. VMware’s cloud management portfolio now includes such sophisticated new features as “intent-based” AIops for multicloud management, which should help it compete with equivalent capabilities from rivals IBM and Cisco.

Here are clips from Lohmeyer’s interview on theCUBE, one of many interviews at VMworld 2019: