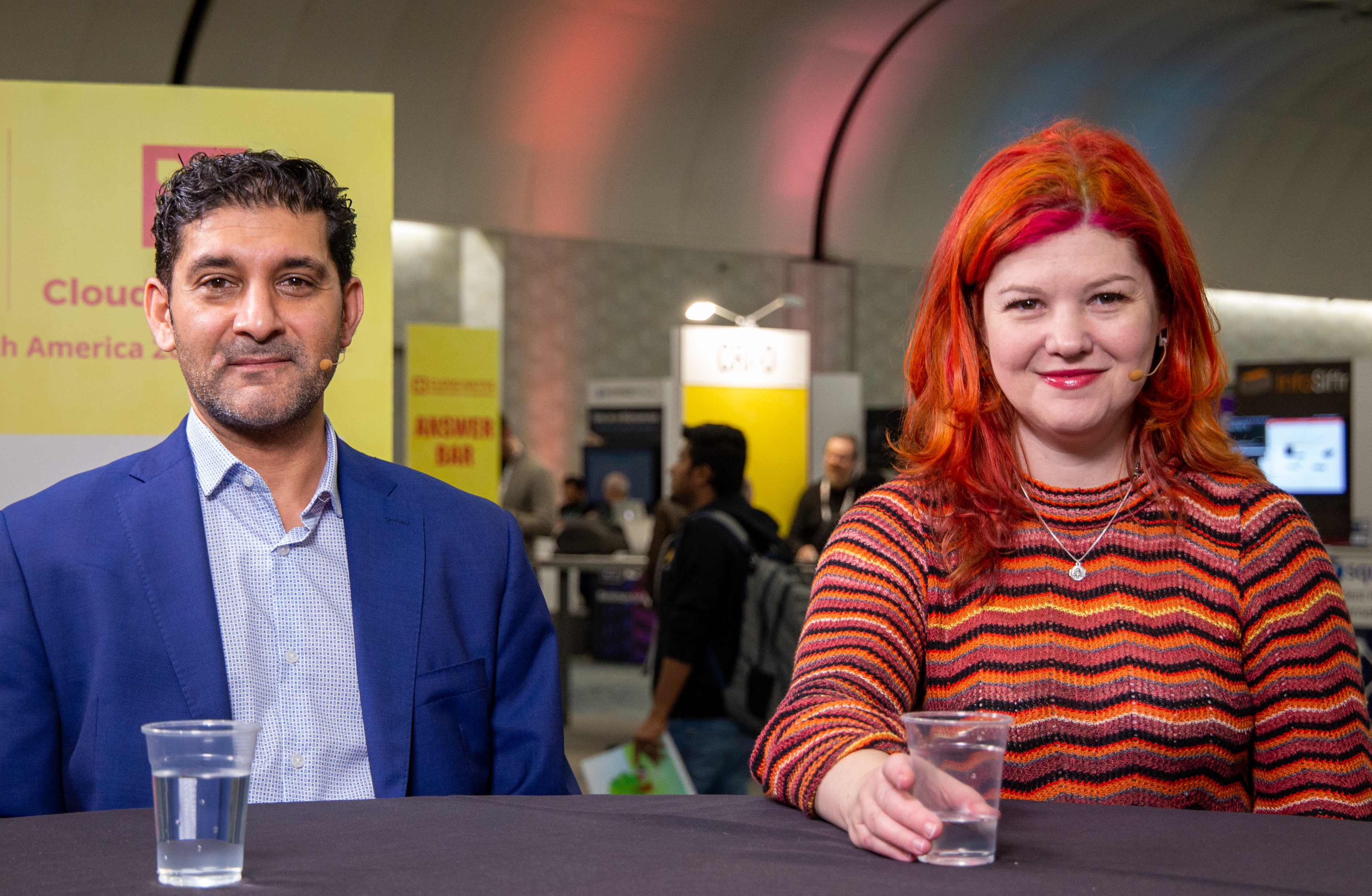 Connectivity is essential in the modern world. But like other important infrastructure, the networking that makes communication simple is hidden behind the scenes.

In a recent demonstration of cutting-edge network technology, a group of volunteers from the telecommunications industry created an end-to-end, 5G, cloud-native network live on the stage at the KubeCon + CloudNativeCon event in San Diego, California.

“Networking is amazing. It just happens to be there, sort of like plumbing and power. But to actually deliver it is a fairly complicated challenge,” said Heather Kirksey (pictured, right), vice president of community and ecosystem development at the Linux Foundation.

Miniman: This was a really cool demo with a lot of things going behind the scenes. Can you give us an idea of how something like this comes together?

Kirksey: We sent out a call to the community and said: “We’re going to try to do full 5G, full cloud native. If you’re interested in joining come on.” 15 organizations said, “Yes, that sounds like something that we would like to prove out.” And 80 volunteers across those organizations ended up working on it.

Miniman: What were some of the issues you encountered?

Kirksey: This was so cutting edge in terms of the 5G aspect that just getting equipment was challenging. And that’s before you even get to building the stack.

Miniman: Turnium Technology is one of the providers that helped with that. Sandeep, can you tell us what drew you into the project and how it is living on that bleeding edge with something like 5G?

Panesar: We’re providing the SD-WAN for this project, connecting the public cloud with the private cloud, deploying and using containers — Kubernetes. We are able to bring the entire thing together by creating one virtual network so that it’s seamless, and all the underlying infrastructure, the layer two, layer one, the underlay is just completely invisible.

It’s absolutely thrilling living on that bleeding edge. It’s exciting, lots of risk, but the pay off yesterday was fantastic — to be able to complete that call while on stage. It really is a community filled with love and a real drive and desire to build something new and different.

Miniman: Tell us more about how SD-WAN fits into the entire 5G multicloud discussion.

Panesar: At the end of the day, you know Kubernetes is a platform or a tool. SD-WAN is a tool. And if you take all of these tools and put them together, you can actually build something wonderful. That’s what we did in this project here. We were able to deliver a 5G call and run it everywhere.

Kirksey: Telecom definitely likes to be opinionated — that’s kind of in our soul. But it also is useful because, really at the end of the day, interoperability for the type of scale that telecom operators have is very important. They’re using all these applications to write services to their customers, so they have a business need to make sure everything really works end to end.

So, there’s actually an initiative right now between the LF Networking project and the GSMA [mobile operators industry association]. [We’re looking for] opinion around what should the cloud platforms look like and how can we start doing things like compliance and verification programs around commercial implementations. Whether it is the underlying platform or whether it’s the applications on top. Because at the end of the day, we’re really needing to help them accelerate their deployments and get that agility that’s the promise of cloud.

Watch the complete video interview below, and be sure to check out more of SiliconANGLE’s and theCUBE’s coverage of the KubeCon + CloudNativeCon event. (* Disclosure: The Cloud Native Computing Foundation sponsored this segment of theCUBE. Neither CNCF nor other sponsors have editorial control over content on theCUBE or SiliconANGLE.)