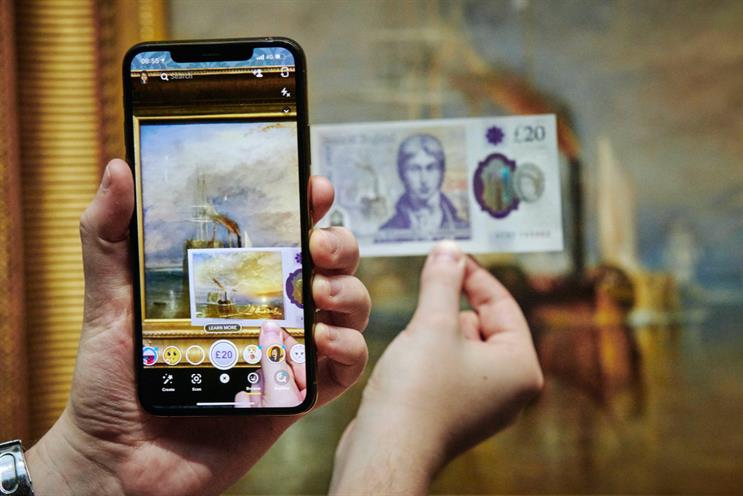 The note itself displays a self-portrait of JMW Turner, a 19th-century English Romantic painter known for turbulent landscapes and violent marine warfare paintings. Users of Snapchat can use an AR lens in the app to bring to life an animated version of his depiction of the naval warship, “The Fighting Temeraire.”

The AR effect works by pointing the phone at the note, which then overlays the images over the bill itself in full animated, living color. The painting depicts the warship of the same name, a 98-gun ship-of-the-line from the Battle of Trafalgar, under tow toward its final berth where it would be dismantled for scrap.

Snapchat also confirmed that the new AR Lens will also work on pictures of the new £20 note.

“The launch of the new £20 will result in Turner’s paintings being amongst the most widely distributed artworks in the U.K., maybe even the world,” said Ed Couchman, Snap’s U.K. general manager. “We want to make sure that Snapchatters are encouraged to take note, look at the cash in their wallet and appreciate these great paintings. Hopefully, this partnership will help introduce a whole new generation to one of Britain’s greatest-ever painters.”

Users must unlock the AR Lens by using a Snapcode – a specialized image – featured on The Bank of England’s informational webpage about the new note.

“This is a great example of using augmented reality for storytelling,” said Max Dawes, managing director at Zappar Ltd., an AR platform and creative studio. “English banknotes have always taken the opportunity to demonstrate the rich heritage of the United Kingdom, so using AR for a visually striking artist like Joseph Mallord William Turner is an innovative approach. It is also similar to our work with the Royal Mint with the launch of the 50p coin; collectors scanned the packaging to unlock exclusive content, including the opportunity to take and share a birthday picture with their very own virtual 50p coin.”

The technology of AR has found numerous uses in the everyday life of consumers and the day-to-day operations of businesses. These uses include overlaying directions and extra information for navigational apps, such as Yahoo! Maps Japan, for use in marketing and advertising, such as Aurasma, and by magazines and museums to provide extra information. Enterprise businesses use AR to share knowledge and provide telepresence for remote collaboration, products that feature this include Scope AR’s WorkLink and Spatial Systems Inc.’s 3D collaboration software.

The use of AR has also been mainstreamed by the popular video game Pokemon GO from Niantic Inc., which uses the technology to display its collectible creatures, and now the Harry Potter: Wizards Unite AR game from the same developer.

“We anticipate more companies will be using augmented reality in the future, as they recognize that it can be a powerful media channel not only for one-off activations but integrated ‘always-on’ campaigns,” said Dawes. “With the rise of WebAR — a way to publish AR experiences to the mobile web, rather than download an app like Snapchat — anyone with a smartphone can access the content. We anticipate more campaigns like this throughout the 2020s and onwards.”