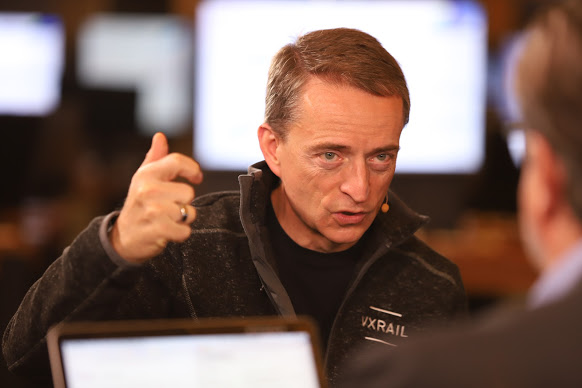 VMware Inc. beat expectations on revenue for its fiscal 2020 fourth quarter, but it wasn’t enough to avoid a disappointing profit that sent its shares south late today.

The computing virtualization software company, majority owned by Dell Technologies Inc., reported a fourth-quarter profit before certain costs such as stock compensation of $868 million, or $2.05 a share, up 9% from a year ago. Revenue rose 11%, to $3.07 billion.

However, Gelsinger also admitted “late-quarter execution challenges” on some big deals. “We didn’t have as good execution at the end of the quarter,” he said. “We simply had too much to get done at the end of the quarter. One very large deal came in an hour after our bookings cut off.” He said executives are working on improving its ability to close more deals quickly.

After closing down 6%, to $135.63 a share, in regular trading on another coronavirus-ravaged day for broader markets, VMware’s shares were falling another 6% in after-hours trading.

VMware made progress on subscription and software-as-a-service sales — previously called hybrid cloud and SaaS revenue — which collectively jumped 52% from a year ago, to $556 million.

“VMware keeps staying relevant in difficult overall market environments, with more and more workloads moving to the public cloud and off VMware,” said Mueller. “The good news for shareholders is that VMware keeps innovating and participating in the next-generation compute platform market, partnering with infrastructure-as-a-service vendors for on-premises workload automation.”

However, that progress also hurt results in some ways. License revenue fell short because of a higher SaaS mix and the company also saw a stronger-than-expected mix of subscription and SaaS revenue, Chief Financial Officer Zane Rowe said on the earnings call.

That said, VMware reported a record number of enterprise deals worth more than $10 million — 31, up from 23 a year ago — included a “significant increase” in the value of subscription and SaaS offerings in the top 10 deals. That’s more than double the level a year ago, according to Rowe.

And the company can take credit for boosting its parent significantly. “I still see VMware as the percent growth and profit driver for Dell Technologies,” said Patrick Moorhead, president and principal analyst at Moor Insights & Strategy. “VMware enables growth in solutions like Unified Workspace and the Dell Technologies Cloud. Not only are these solutions higher-margin, they are where the growth will come from.

Although Moorhead said Dell has many opportunities in the on-premises piece of hybrid cloud computing, “VMware is how the company will drive revenue in the public cloud.”

Gelsinger said the company expects “some moderation” of growth from the impact of the coronavirus, but “the bigger picture is unchanged.”

In mid-February, the virtualization software firm reportedly was planning to lay off more than 200 workers in April, including workers at the executive and director level. The company said in a statement that the job cuts are part of a “regular workforce rebalancing.”

Still, the company has been on something of an acquisition spree in the past year. In January, it acquired networking analytics startup Nyansa Inc., less than a month after closing its $2.7 billion purchase of enterprise application development platform Pivotal Software Inc. Last August, it also spent $2.1 billion to buy cybersecurity firm Carbon Black Inc.