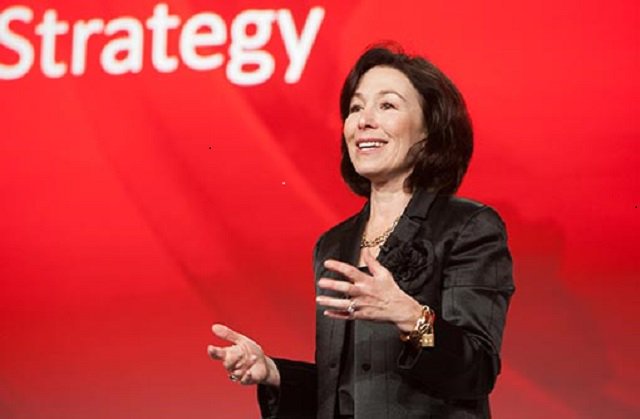 Revenue rose nearly 2%, to more than $9.79 billion, from a year ago. Profits fell slightly, to $2.57 billion, or 79 cents per share, but adjusted earnings of 97 cents per share slightly beat analyst estimates. Investors initially cheered the return to growth, bidding up shares a little more than 3% in early after-hours trading.

Oracle’s revenue growth has slowed recently as the company continues to navigate a path to the cloud. The company had posted quarterly growth rates of of less than 0.5% for six straight quarters and is reportedly laying off 1,300 employees in Europe. However, there is evidence that it has has decisively turned the corner toward a more predictable subscription model.

Cloud revenues made up 72% of total sales in the quarter, up from 70% a year earlier. Oracle Chairman and Chief Technology Officer Larry Ellison said recurring revenue, largely from subscription sales, made up 71% of total revenue in the quarter.

“We expect the cloud ERP segment to be two to three times larger than the on-premises market,” she said. Oracle claims to have more than 7,000 Fusion ERP customers and 21,000 NetSuite customers.

No coronovirus effect yet

Oracle is the first of the major tech firms to report figures from a period that includes the onset of the coronavirus in Europe and the United States. Katz said there has been no discernible impact on sales so far but that Oracle is somewhat insulated by virtue of its business model.

“It’s not yet clear what the effect of the virus will be on our customers and suppliers and, as a result, on our business in Q4,” she said. “We’re largely conducting business as usual.”

She did cite stock market volatility, as a reason for offering a wider range of revenue guidance than usual. Oracle’s earnings were announced at the end of the stock market’s worst day since 1987, with the Dow Jones Industrial Average diving 2,352 points, or nearly 10%. Nevertheless, executives said the outlook is bullish. Oracle expects subscription revenues to grow between 3% and 5% in the fourth quarter and total revenue to range from a 2% decline to 2% growth. Earnings per share are expected to grow 3% to 9% to a range of $1.20 to $1.28 per share.

“Due to its position as a leading provider of enterprise application software, Oracle appears to be more insulated from the coronavirus damage than its hardware-focused peers,” said Andrew MacMillen, analyst at Nucleus Research Inc. “That said, coronavirus worries may scare customers away from undertaking cloud transitions, adding to the difficulties of transitioning legacy on-premises deployments.”

Nevertheless, this is not time for Oracle to get cocky, said MacMillen. “Oracle’s long-term success in the space will continue to cushion the impact of the arrival of new players, but each team will need to continue pushing to develop the product and facilitate transitions to the cloud,” he said.

The company doesn’t have to win in the infrastructure game if it can use its cloud to leverage its other businesses, said Charles King, president and principal analyst at Pund-IT. “Oracle’s leadership position in enterprise database should position it well for cloud-enabled database services but it is likely to act more like a spoiler than a serious challenger in broader cloud offerings,” he said.

Sales of the company’s new Autonomous Database product grew 150%, though off a small base. “The Autonomous Database solutions appear to be doing well,” King said. “Oracle deserves credit for both the flexibility of its offerings and the way it is engaging with clients to ensure they get full value.”

Oracle also said its board has authorized $15 billion in additional stock buybacks on top of the $13.9 billion the company spent in the first nine months of the current fiscal year and the nearly $30 billion it spent last year. “Our stock is a bargain and it was a bargain even before [before the recent downturn],” Katz said.