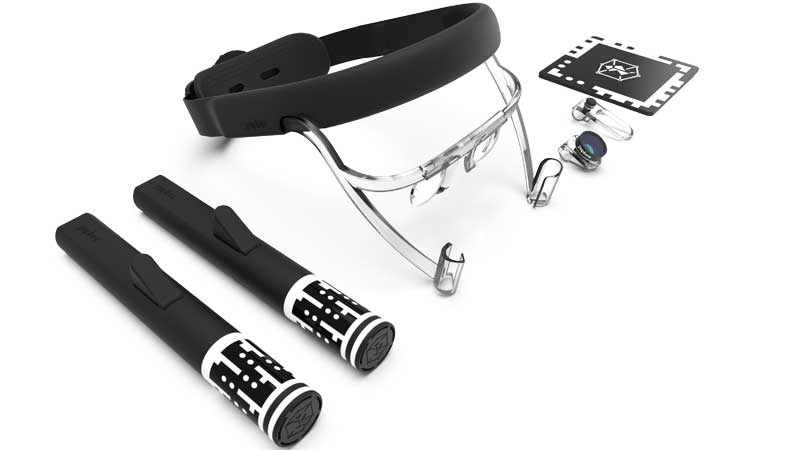 Zappar Ltd., a London-based augmented reality platform and creative studio for mobile apps, announced Wednesday the launch of a Kickstarter to fund the launch of a ZapBox, a new mixed-reality device designed to bring immersive AR experiences to customers on the mass market with an affordable $40 price tag.

The device looks a bit unorthodox because it’s not like ordinary smart glasses. It ‘s built more like a halo on the head and holds a pair of lenses in front of the eyes with a mobile device — a smartphone — in front of the face, and it comes with a pair of wandlike controllers.

The smartphone is where most of the actual price of the augmented reality experience will come from. The ZapBox itself is a scaffolding for allowing the AR experience, much like the GearVR or GoogleCardboard, but it removes the guesswork from getting an expensive all-in-one AR or MR device and most users already have a smartphone capable of AR.

It offers an almost uninterrupted peripheral view of the real world that should mostly naturally blend the real world and the immersive content together with 3D content as viewed by the user.

A Unity plugin will also enable developers to build native iOS and Android apps for ZapBox content. Content can be created and distributed with the dedicated ZapWorks Studio tool and viewed instantly using the ZapBox app.

“We wanted developers to be able to explore the possibilities of immersive six-degrees-of-freedom mixed reality and virtual reality experiences, without the high cost of entry for dedicated hardware,” said Simon Taylor, co-founder and chief research and development officer at Zappar. “All-new ZapBox offers a great balance between affordability and capability that lets Unity and ZapWorks users create the impactful experiences they want.”

The all-new ZapBox features this radial new “halo” design, which is light, robust and easily adjustable for different uses and provides unobstructed peripheral vision of the real world for comfortable MR experiences (it also stays out of the way for people who wear glasses).

Live-hinged phone grips ensure phones are held securely and centrally in place for the optimal stereoscopic experience and it supports a wide variety of devices.

The ZapBox’s reimagined controllers may look a little odd, but they provide live tracking for gestures and interact well with the Zappar’s new anchor technology for AR for content placement and drift-free tracking.

“The all-new ZapBox takes everything we’ve learned over the last five years to create the ultimate way for people to experience and build compelling interactive mixed-reality content, and will offer unbeatable value at just $40,” said Caspar Thykier, co-founder and chief executive at Zappar.

ZapBox will launch on Kickstarter with a fundraising goal of $65,000. Backers can choose among a range of tiers to support the campaign, including a $40 pledge for a single unit, which is the retail price tag, and a $299 pledge level, for a 10-pack, which is the same price as the Oculus Quest 2.

The campaign follows in the footsteps of the success of the initial cardboard iteration of ZapBox on Kickstarter in 2016, which raised 280% of its funding goal thanks to the support of 1,854 backers.

“As a business, we’ve always focused on democratizing XR for the mass market and ZapBox is more evidence of our commitment to deliver against that promise,” said Thykier.