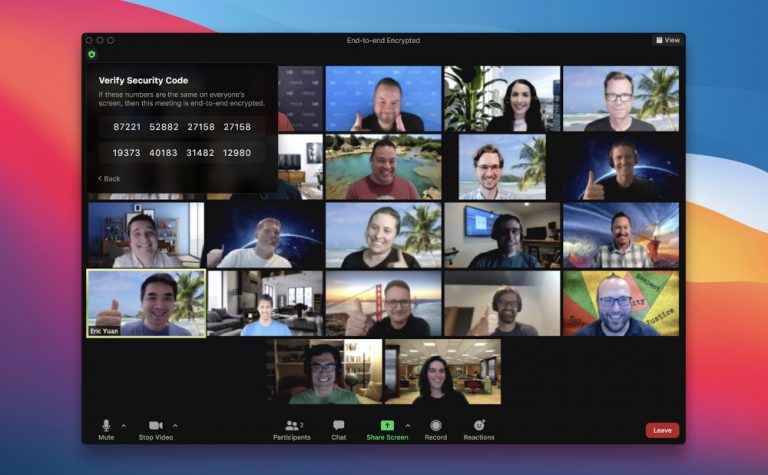 Zoom Video Communications Inc. will soon roll out end-to-end encryption, delivering on a promise it made earlier this year to improve security and privacy for users.

The feature is set to become available next week in preview. Zoom head of security engineering Max Krohn, who announced the update today against the backdrop of the company’s virtual Zoomtopia event, described the initial end-to-end encryption implementation as “Phase 1 of 4 of our E2EE offering.”

The company didn’t go into detail about the planned future phases. However, it did say that the initial end-to-end encryption feature rolling out next week will be available to both free and paid users via an opt-in account setting. Users will also have to enable the feature for every individual meeting.

End-to-end encryption scrambles video and audio in a way that prevents even Zoom itself from reading the data. The meeting feed is encrypted on the user’s device before transmission, meaning the data passes through Zoom’s servers in an unreadable form. Only meeting participants have access to the cryptographic keys necessary to perform decryption.

Zoom already protects meetings using the AES 256-bit GCM encryption technology. However, the task is performed using cryptographic keys that are stored on the company’s servers.

The Zoom client will display a green shield icon at the upper left corner of the interface when end-to-end encryption is  enabled for a meeting. “Participants will also see the meeting leader’s security code that they can use to verify the secure connection,” Krohn detailed. “The host can read this code out loud, and all participants can check that their clients display the same code.”

In the so-called Phase 1 phase, switching on end-to-end encryption disables certain other Zoom capabilities such as cloud recording, live transcription and polling. Meetings with the feature enabled can have up to 200 participants.

Zoom announced plans to implement end-to-end encryption early into 2020 and in May acquired Keybase Inc., an Andreessen Horowitz-backed secure chat startup, to speed up development. The New York startup had created a Slacklike messaging platform capable of scrambling messages on the user’s device before they’re sent over the network.

The end-to-end encryption support should strengthen Zoom’s value proposition both for enterprises and consumers. Enterprises may prefer the extra security for meetings in which sensitive business information is discussed. For privacy-conscious consumers, the feature could make Zoom a more compelling alternative to Facebook Inc.’s WhatsApp, which has long included end-to-end video encryption.

Zoom also announced other enhancements at its Zoomtopia event today. One of the highlights was the introduction of “Zapps,” embedded versions of popular services such as Dropbox that can be accessed directly from the Zoom interface without opening a separate tab.