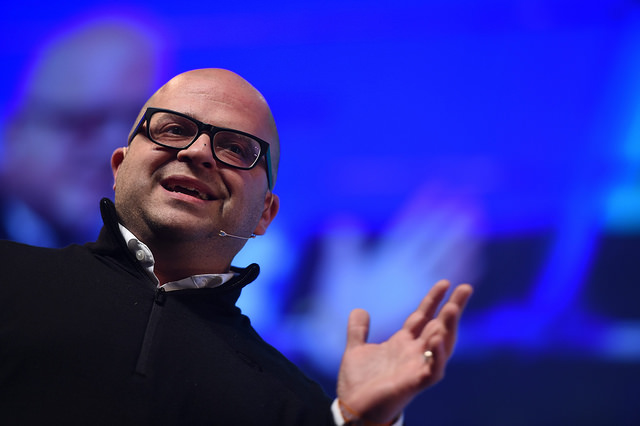 The results also beat Twilio’s own conservative forecast. Back in October, the company told investors it was looking at revenue of $450 million to $455 million for the quarter. Twilio also reported a full-year profit of 23 cents per share on revenue of $1.76 billion.

“Twilio’s 65% year-over-year total revenue growth in the fourth quarter continued the strength and momentum we saw throughout an outstanding year,” said Twilio Chief Executive Jeff Lawson (pictured). “These results reinforced that we are addressing a generational opportunity, and with our acquisition of Segment and strong traction with Flex, we are building the leading customer engagement platform to improve every interaction that businesses have with their customers.”

Twilio sells a range of communications services that are used by software developers to add text messaging, video and voice call and email functionality to their applications. It also sells cloud-based contact center software that can be used by enterprise’s customer service agents, which effectively makes Twilio more of a customer engagement platform.

One of Twilio’s main rivals in the cloud communications market is the Swedish company Sinch AB, which sells a communications platform that facilitates engagements between consumers and businesses via voice, mobile messaging and video.. However, Sinch could soon present much stiffer competition to Twilio, as it announced today that it’s acquiring another Twilio rival, called Inteliquent Inc., for $1.14 billion.

Inteliquent’s offerings include a communications platform-as-a-service offering that enables companies to add voice calling into their apps, as well as an infrastructure-as-a-service platform that provides contact center services. Those capabilities now belong to Sinch, and that should see it emerge as a more serious competitor to Twilio.

Still, Twilio hasn’t been standing still. During the third quarter, it made a big acquisition of its own, paying $3.2 billion to buy Segment Inc. That acquisition gave Twilio access to Segment’s customer data platform that merges records from various systems into a single dataset in order to make it easier to work with.

Twilio is already reaping the rewards of that acquisition, with officials saying that Segment added about $23 million to its sales during the quarter.

The company also benefited from strong customer growth. It added more than 13,000 new active customer accounts in the three-month period, bringing its total to 221,000.

Analyst Holger Mueller of Constellation Research Inc. said Twilio had an impressive quarter, noting that it took the company just one year to go from breaking the $1 billion revenue barrier to hitting the $2 billion barrier on an annual runrate basis.

“That shows how well Twilio has hit the nerve with its offerings that enable developers to build in communications to create social and consumer-centric applications,” Mueller said.

On the down side, Mueller said one cause for concern is that Twilio managed to burn close to half a billion dollars in costs last year, with its general and administrative expenses doubling in the last quarter alone. “Sooner or later Twilio’s management will have to address these profitability challenges, because although revenue growth is good to see, the growing losses do take the shine off of it,” he said.

For the first quarter, Twilio said, it’s expecting a loss of between nine and 12 cents per share on revenue of $526 million to $536 million. Wall Street is modeling a smaller loss of just two cents per share on lower sales of $492 million.