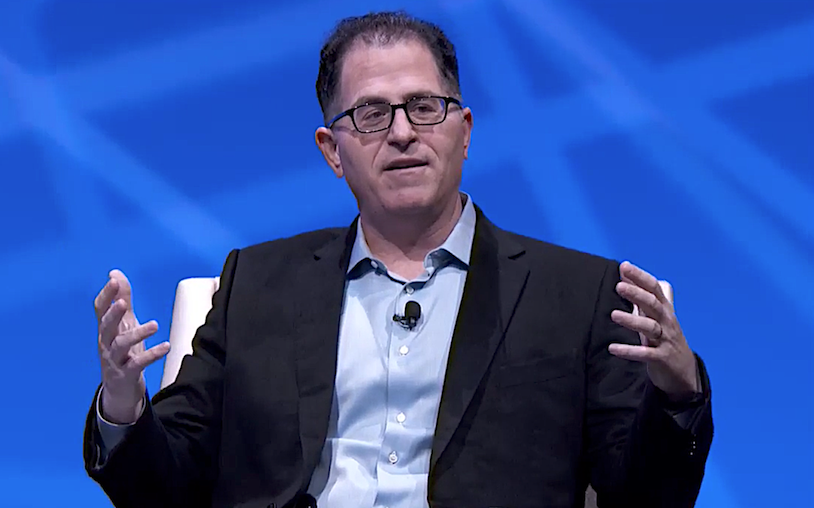 Dell announces long-awaited spinoff of VMware in $9B deal

Dell Technologies Inc. today announced the long-expected spinoff of VMware Inc., the computing virtualization company it has majority-owned since it bought then-owner EMC Corp. in 2016.

The computing giant said it will spin off its 81% equity ownership in VMware, creating two standalone companies when the move is completed in the fourth quarter of this year. That timing depends on conditions such as a favorable Internal Revenue Service opinion that the transaction qualifies for tax-free status for Dell shareholders.

Under the spinoff, which Dell had signaled last July, VMware will distribute a cash dividend of about $11.5 billion to $12 billion to shareholders, which of course include publicly held Dell itself. Chairman and Chief Executive Michael Dell (pictured), along with financial partner Silver Lake Partners, own 60% of Dell shares.

Dell will get $9.3 billion to $9.7 billion of that dividend, which the company said will help it get more investment-grade ratings and enable it to pay down debt it has gradually been reducing since buying EMC. Dell shareholders will get about 0.44 shares of VMware for each of their Dell shares.

“This is about paying off debt, restructuring Dell’s balance sheet and unlocking value for core Dell, without messing up the ‘special relationship’ they have with VMware,” said Dave Vellante, chief analyst at SiliconANGLE sister market research firm Wikibon. “It’s a classic cake-and-eat-it-too strategy — quite genius, actually.”

Dell is also converting all its Class B VMware shares to Class A shares, so there will be only a single class of shares, a simpler and more understandable proposition for investors. On a conference call, Dell Chief Financial Officer Tom Sweet said the move will make the companies eligible for key indices such as the S&P 500 and provide a better float for the shares.

Sweet also said Dell will repay a $4 billion loan before the transaction closes, and VMware’s $8 billion in debt will no longer be part of Dell’s debt. 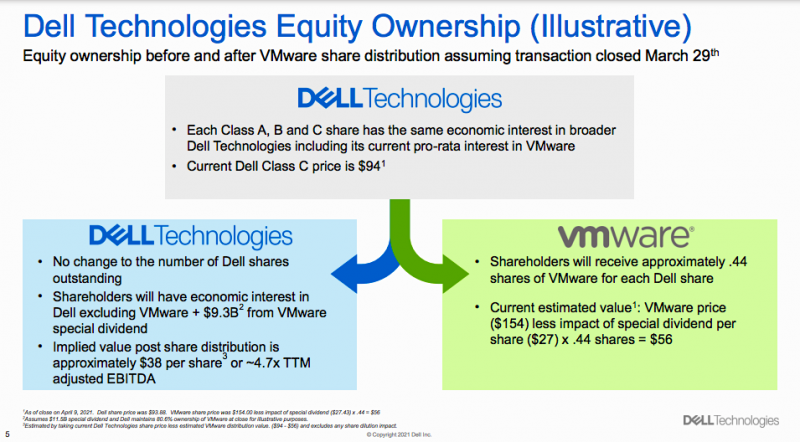 “In the end, this move is more about maximizing the Dell Technologies and VMware stock price and doesn’t impact customers, ISVs or the channel,” Moor Insights & Strategy President Patrick Moorhead told SiliconANGLE. “Wall Street wasn’t valuing the two companies together nearly as much as I believe it will as separate entities.”

Moorhead noted that Dell brought in a lot of VMware’s recent growth –some 35% of VMware’s revenue came through Dell in fiscal 2021 ended Jan. 29, according to Sweet — and Dell benefited as VMWare’s “first” partner on new initiatives. “Given the five-year strategic agreement, it doesn’t look like much will change operationally,” he said. “The optics might allow Dell Tech to partner more closely with VMware competitors and vice-versa, but the two companies were already doing this.”

VMware has thrived in recent years as it reoriented its virtualization business to the cloud, in particular with successful integrations with cloud computing providers such as Amazon Web Services Inc. Its chief executive, Pat Gelsinger, however, recently left to become CEO of Intel Corp.

“By spinning off VMware, we expect to drive additional growth opportunities for Dell Technologies as well as VMware, and unlock significant value for stakeholders,” Dell said on a conference call. He added on the call that “we’re going to retain the benefits of the VMware relationship” while eliminating the stock discount from the existing capital structures.

Dell said the two companies will enter into a commercial agreement that will “preserve the companies’ unique and differentiated approaches to the co-development of critical solutions and alignment on sales and marketing activities.” In particular, VMware will continue to use Dell Financial Services for customers to finance their “digital transformations.”

Once the deal is completed, Dell will remain chairman of VMware and current interim VMware CEO Zane Rowe will remain in that job. VMware’s board also will remain unchanged.

One analyst questioned Dell’s selling off the stake in the faster-growing software company. Michael Dell responded that “the market does not appear to appreciate a hardware-software combination. Shareholders’ feedback is overwhelmingly positive on the spin.”

Vellante also said some unanswered questions remain, such as how much new value this will actually create for Dell in the near term, how taking another big chunk of cash out of VMware will affect that company and how the continuing commercial agreement between the two companies will perform over time. The other factor to consider, according to Vellante, is the “long-term outlook for Dell without its VMware cash machine.”