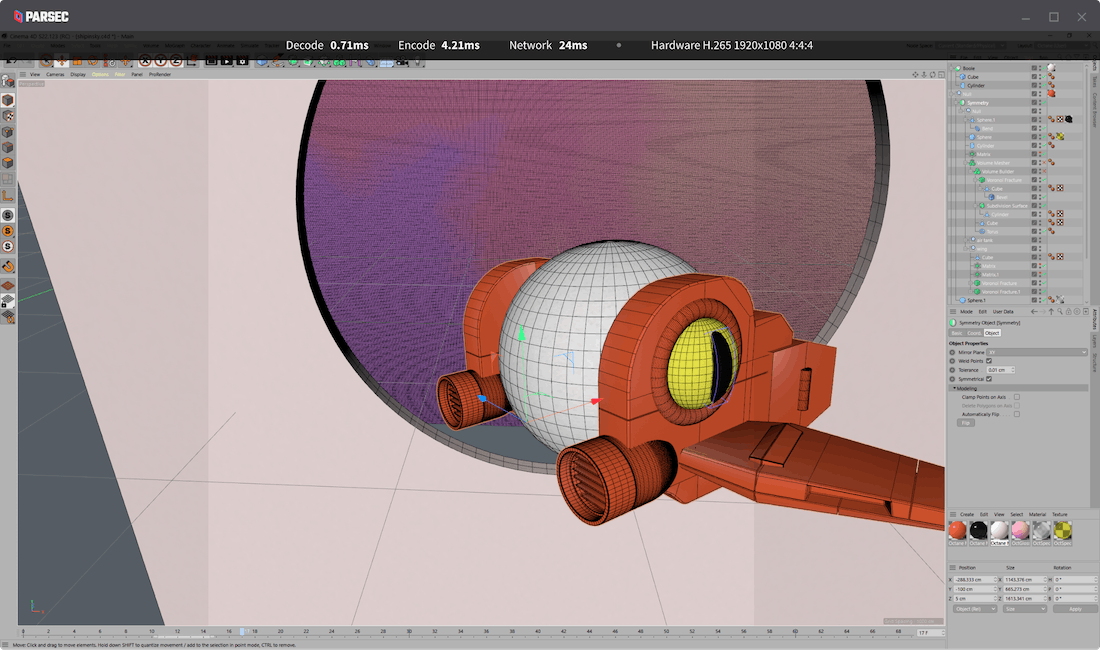 The acquisition, its biggest to date, came as the company reported strong second-quarter financial results that beat Wall Street’s expectations. Notably, its revenue rose 48% from a year ago.

Unity is best known for its 3D gaming engine that’s used by videogame developers to create more interactive gaming environments, as well as virtual reality and augmented reality apps. But its software, which relies on artificial intelligence to render its virtual worlds, can also be used to create full-scale models of objects that can aid design for architects, engineers and even creatives.

The acquisition of Parsec shows that Unity is bent on attracting more creators to its platform. Parsec, which was founded in 2016, began life as a remote desktop provider focused on streaming games to less powerful devices. The idea was that it enabled gamers to play better games than their hardware could support, but it quickly became apparent that its software was just as useful as a tool for creators.

Parsec quickly developed a big following in the creative industry because it provides remote desktop access without compromise, streaming in-progress artwork without messing up the colors and playing nicely with fancy input tools such as pressure-sensitive tablets used by digital artists for sketching and drawing.

Unity stated that buying Parsec is an important step as it moves toward its expanded cloud vision of enabling creators to work from any location, on any device, with access to rich and powerful tools that can be used to deliver “real-time 3D experiences of the future.”

In the earnings call, Unity Software Chief Executive John Riccitiello stressed the company’s goal is to provide users with the best tools to succeed as RT3D creators. “Unity is designed to enable creators to build anything digital and to instantly deploy their work across dozens of platform types and devices, which is to make participating in building the metaverse accessible to all creators,” he said.

The company said it believes RT3D is the inevitable evolution of the way people engage with digital content and will become the foundational technology of the so-called “metaverse.” That’s a vision often promoted by Facebook Inc. CEO Mark Zuckerberg that refers to a kind of virtual universe where people would use digital avatars and VR to interact.

“Creators and artists of all types turn to Unity to create rich, interactive content, build applications and experiences across platforms and narrow the divide between creators and consumers regardless of industry,” Unity said in a statement.

Unity’s financial results indicate that the company is progressing quickly toward that vision. It reported break-even earnings before certain costs such as stock compensation on revenue of $273.6 million. Wall Street had expected the company to report a loss of 13 cents per share on sales of $243 million, so it was a fairly solid beat.

The company underlined its progress, noting that it now counts 888 customers with annual revenue of more than $100,000, up from 716 a year ago. Driving that customer growth was its momentum in nongaming industries, with three new automotive manufacturers and a number of consumer product brands, including an eyewear manufacturer and a well-known home appliance brand, the company said.

As part of Unity’s drive away from gaming, it is also getting into artificial intelligence training. The company sees its virtual 3D worlds as an ideal training ground for various kinds of AI and to enable that it recently began selling synthetic datasets that it says can be used to teach algorithms in very specific areas where real data may be hard to come by.

For the third quarter, Unity is expecting another strong showing, with revenue in the $260 million to $265 million range, comfortably ahead of Wall Street’s target of $253.9 million.