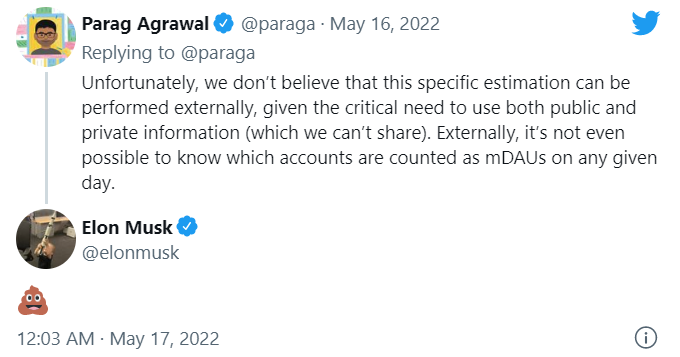 Since Musk made that offer in April this year, there has been no shortage of drama. As a self-confessed free speech “absolutist,” Musk has stoked the fears of governments and parts of the public alike, and just a few days ago, Twitter’s share price dropped as he took to the platform himself and said the deal was now on hold. Nonetheless, he added that he was “still committed” to buying Twitter at some point.

It seems his concern now is with the number of fake accounts or spam bots that plague the platform, saying this could affect how much money he’s willing to spend. “It really depends on a lot of factors here,” he said at a Miami summit. “I’m still waiting for some sort of logical explanation for the number of sort of fake or spam accounts on Twitter. And Twitter is refusing to tell us. This seems like a strange thing.”

Such fake accounts might make up about 5% of Twitter users, or at least that’s what Twitter says in its monthly reports. Musk says he’s not too sure about that number, believing it could be much bigger. The company’s chief executive, Parag Agrawal, had something to say about today when he tweeted about “data, facts and context.”

“First, let me state the obvious: spam harms the experience for real people on Twitter, and therefore can harm our business,” he wrote. “As such, we are strongly incentivized to detect and remove as much spam as we possibly can, every single day. Anyone who suggests otherwise is just wrong.”

He added that every day Twitter suspends over a half-million spam accounts and each week millions of accounts are locked when it’s thought they might be spam. He said Twitter “isn’t perfect” when it comes to catching spam, but when the company says it’s about 5%, the estimate is based on some thorough investigation.

“Our actual internal estimates for the last four quarters were all well under 5% – based on the methodology outlined above,” he said. “The error margins on our estimates give us confidence in our public statements each quarter.” In his own tweet, Musk likened the number to being told a house you might buy “has less than 5% termites,” which he said is fine, but not if it turns out the place is 90% termites.

To further add to the drama, in typical Musk style he left a poop emoji below Agrawal’s analysis of the bot issue, obviously asserting that he doesn’t believe Agrawal is telling the truth. “So how do advertisers know what they’re getting for their money?” Musk wrote next to the poop. “This is fundamental to the financial health of Twitter.”

At the conference, Musk defined his poop post, saying he thinks bots and spam make up anywhere from 20% to 25% of Twitter users. This might, of course, be his way of getting a cheaper price, or he could be looking to pull out of the deal, or he might be genuinely concerned. All this remains to be seen, but things are rarely not interesting when it comes to Elon Musk.