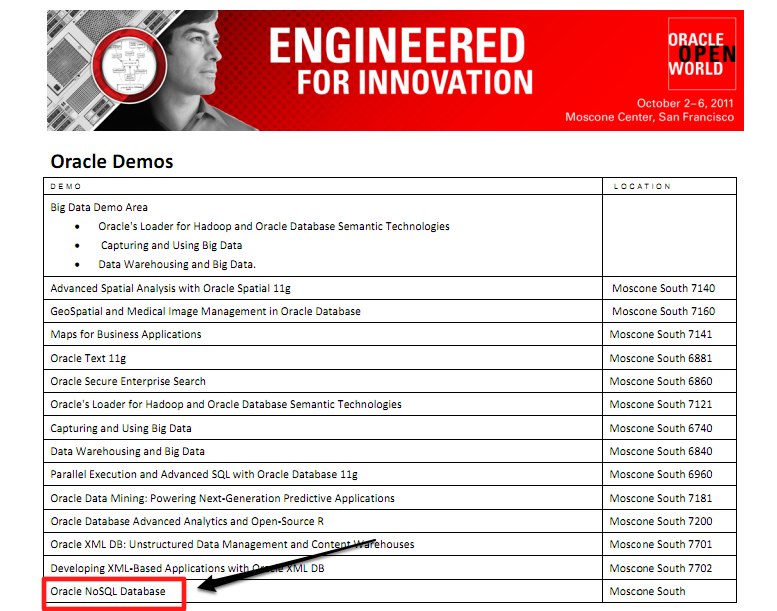 Oracle plans to launch and demo a NoSQL database at Oracle OpenWorld next week along with a Hadoop data builder and in-memory data store.

According to information from the Oracle Open World Web site, the new offering will be part of keynotes from Intel and Cisco. It will also be demonstrated on both Intel and Cisco hardware.

The demos will go on view in Oracle’s Big Data demo area at the Moscone Center. The demos are part of Oracle’s “Focus on Big Data,” which also includes a demo for an Oracle Data Loader for Hadoop. The sessions also include at least one titled: “In-Memory Data Warehousing: Bringing Real Time to Big Data,” conducted by Jean-Pierre Dijcks, a senior principal product manager with Oracle. Oracle could not be reached for comment about this story.

“Good for them,” said David Floyer, co-founder at Wikibon about an Oracle NoSQL database. “They want to establish themselves as relevant to the marketplace.”

Oracle CEO Larry Ellison said in the company’s earnings call last week that it would be launching a Hadoop appliance and Hadoop data connector at its annual user conference.

A Hadoop offering is a logical step for Oracle. EMC Greenplum, IBM Netezza and HP Vertica now all have some flavor of a Hadoop connector. Oracle wants to continue its dominance in the database market. With a Hadoop offering, customers may collect all the data for a customer and place it in an Oracle central database.

Mike Olson sold Berkeley DB to Oracle. He then left Oracle and started Cloudera. He has said he wants Cloudera to become the next Oracle. Would Cloudera be an option for Oracle? Several other companies, including Dell, HP and even Red Hat have been seen as potential acquirers of Cloudera.

NoSQL and Hadoop serve as symbols of the modern services providers. They are technologies meant for a modern infrastructure. Oracle looks like it is playing lip service. They have shown every sign of entrenching itself in legacy technology to fuel its business model. The question is what happens when you start adopting new technologies such as NoSQL.

Has Oracle just tripped into the rabbit hole?