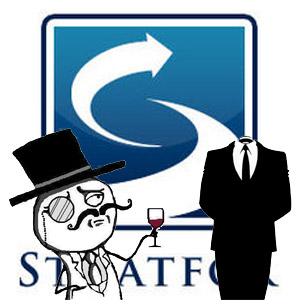 Members of the Anonymous hactivist collective have come forward to claim that they raided U.S.-based security think tank Stratfor and stole the presents from beneath their Christmas tree—in the form of a database containing thousands of credit card numbers and other personal information belonging to clients. One hacker claimed that they intent was a sort of Santa Robin Hood move where funds taken from accounts would be used for Christmas donations, some victims have confirmed unauthorized transactions linked to their credit cards.

As if working from a naughty-and-nice list, Anonymous taunted the security firm on Twitter with a message reading: “Not so private and secret anymore?” Alongside the collective has promised that the attack on Strafor is only the beginning of other Christmas-related attacks on a lengthy list of other “naughty” targets.

According to The Washington Post, the real embarrassment here is that the hackers suggest that Stratfor didn’t bother encrypting credit-card details or personal information. Stratfor didn’t respond directly to deny this, but their vice president of intelligence said that the company has protections in place to prevent such attacks. He also noted that highly determined attacks are extremely difficult to stop.

As a result of the lack of encryption, sources of Anonymous say that they plundered almost 200 gigabytes worth of personal information and financial details. They have noted that they’ve released only a tiny fraction of that information and intend to keep doling it out in further leaks over the holiday week.

The credit card theft turns on a personal edge with employees of various company’s having their personal information exposed by Anonymous and credit-cards used for donations.

Anonymous members posted photographs on Twitter of receipts showing various credit cards used for the charitable donations. One included a $250 donation to a non-profit using the card of a Defense Intelligence Agency employee.

Others, such as Allen Barr, a retired security expert from Austin, Texas who worked for the Texas Department of Banking discovered Friday that his account had been used to make almost $700 worth of donations to various organizations.

“It was all charities, the Red Cross, CARE, Save the Children. So when the credit card company called my wife she wasn’t sure whether I was just donating,” said Barr, to The Associated Press. “It made me feel terrible. It made my wife feel terrible. We had to close the account.”

One Anonymous member, with the Twitter handle AnonymouSabu claimed a booty of over 90,000 credit cards from law enforcement, the intelligence community and journalists had been pilfered. Also in one conversation reveals that the accounts they stole belonged to “corporate/exec accounts of people like Foxnews.”

Of course, the Sabu Twitter account is a reference to the infamous social face of LulzSec, a small band of Internet hackers who created quite a stir in the security community during June and July 2011. Amid their exploits they hacked a sex industry website, the U.S. Senate website, and even Sony while they were down. The Santa Robin Hood attack is being dubbed LulzXmas in homage to the LulzSec 50-day-rampage by those on Twitter using the hashtag #LulzXmas to repost the results of the hack, press, and receipts from donations to charities.

Of course, law enforcement has been dispatched to hunt down those who have taken and used the credit card information. As we’ve already seen, after LulzSec set said earlier this year, there have been numerous arrests related to them in both Europe and the United States.

It may only be a matter of time before agencies close in on those responsible for these attacks.

Meanwhile, Anonymous tells us to stay on our toes as they have “enough targets lined up to extend the fun fun fun of LulzXmas through the entire next week.”