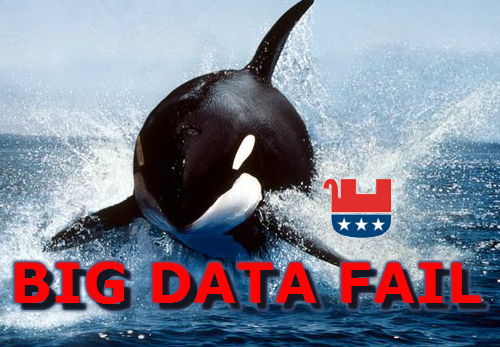 A week after the 2012 Presidential election, we have seen the waves of opinions, analysis, and even soul-searching. The outcome surprised many as Obama was re-elected despite a number of indisputable issues, the foremost being the state of the economy.  Both sides are looking at many factors, doing analysis, the breakdowns, voting numbers, and deep details across the board.  One thing getting its due is the Big Data element, from Nate Silver to the world of data-crunching, Big Data is inescapable now.  John highlighted this in his opinion this week:

Its influence on this election has been poorly documented but it played a huge role in returning Obama to the White House. CNN, Fox and the networks completely missed the Big Data/Silicon Valley angle.  I’ve been saying Big Data can disrupt all industries and here it has disrupted the election.  It literally put Obama over the top.  It was that close.  Romney just got out played in the big data listening game.

Back in June I wrote “Obama’s Big Data Play” that previewed the undertaking:

What we’re seeing is a case study for a Big Data.  There are multiple datasets to draw from; each with a vast depth, richness, context, and variety of information to offer.  How those datasets correlate is where the real value lies.  From the various resources that are available that include the various Apps, Facebook, Twitter, Web Crawling, Social Media campaigning, email campaigns, the best that this information can provide is best served in a unified outcome – and that is an essence of Big Data – bringing together information from varied resources into a resulting body of outcomes that has a targeted value.

Data Matters
Time’s “Inside the Secret World of the Data Crunchers Who Helped Obama Win” details the operation: from raising money, getting the message out, voter turn-out, and predicting outcomes.  Bottom line – the data mattered and ultimately drove decisions traditionally left to advisers and other high-level operatives.  This is Big Data realized – technology delivering trends, truth, and results from extensive data points.

Project ORCA is a massive undertaking – the Republican Party’s newest, unprecedented and most technologically advanced plan to win the 2012 presidential election.

Turns out it was a massive fail – for all the campaign’s failures along the way, Orca appears to be the worst.  Designed to identify likely Romney voters throughout Election Day who had not yet voted and get them to the polls – it was plagued by constant crashes and volunteers that were confused about how to use it.  On the Ace of Spades blog, campaign volunteer John Ekdahl tells of the problems:

“Working primarily as a web developer, I had some serious questions. Things like ‘Has this been stress tested?’, ‘Is there redundancy in place?’ and ‘What steps have been taken to combat a coordinated DDOS attack or the like?’, among others. These types of questions were brushed aside (truth be told, they never took one of my questions). They assured us that the system had been relentlessly tested and would be a tremendous success.”

“For starters, this was billed as an ‘app’ when it was actually a mobile-optimized website (or “web app”). For days I saw people on Twitter saying they couldn’t find the app on the Android Market or iTunes and couldn’t download it. Well, that’s because it didn’t exist. It was a website. This created a ton of confusion. Not to mention that they didn’t even turn it on’ until 6AM in the morning [on election day], so people couldn’t properly familiarize themselves with how it worked on their personal phone beforehand.”

Had Orca run better would it have made a difference?  With close margins throughout the country, it couldn’t have hurt.  A smooth operation would at least evoke a sense of order and professionalism.  By all accounts the execution of this big data and application roll-out was a disaster – untested with poor handling of messaging and deployment as well.  Breitbart.com adds the following criticism:

There was, in fact, massive suppression of the Republican vote–by the Romney campaign, through the diversion of nearly 40,000 volunteers to a failing computer program.

The Romney camp emerged from the dust to respond in the National Review:

“..the Romney campaign is denying that there was any “massive failure” of Orca…they say the system worked, albeit with minor glitches. Ultimately, the campaign had voting data from 91 percent of counties, said Romney digital director Zac Moffat.”

Orca “has no relation to the outcome,” a Romney aide says.

That last statement is just incredible.  If the project did not have or was not intended to have any relation to the outcome, then why put so much cash, personnel, volunteers, and focus put into this project in the first place.  This batch of campaign advisers is in full cover-up and denial mode and trying to bury the fact that the technology aspect of the Romney campaign missed badly.  The cover-up is not being well-received as Andy from Ace of Spades states:

“.. we’re going to get to the bottom of this. And by the time we’re done the responsible parties, specifically Rich Beeson, Dan Centinello and Zac Moffatt, will join the Steve Schmidts and John Weavers of the world on the DO NOT SUPPORT ANYONE WHO WOULD HIRE THIS PERSON! roster of GOP campaign consultants.”

Looking Forward
The data-crunching starts now, with Big Data at the center of it all.  There are troves of data yet to emerge from this and will be studied by both sides extensively.  The take-away is that there are lessons to be learned from successes and failures.  The Democrat party got a head start this time around, but the Republicans have endured and have access to data now that details their most critical failures.  Everything is game.  2014 mid-term elections are not that far away and 2016 is already in sight, that’s how it works.  The Republican Party will be looking at building a bigger, better mobile-first data assault and so will the Democrats.  It’s an arms race with Big Data as the weapon.