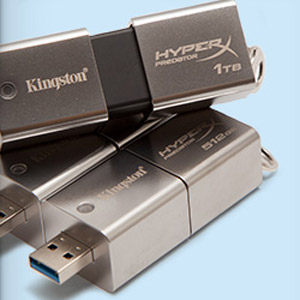 CES 2013: Kingston and Victorinox Manage to Fit 1TB in a Flash Drive

After the explosive pre-shows, Consumer Electronics Show (CES) 2013 kicks of tonight in Las Vegas for a 4-day technological nirvana. The biggest names in information technology industry are expected to wow the crowd with groundbreaking product launches. One of these is world’s leading supplier of memory servers and devices, Kingston, which will introduce their much-awaited 1 terabyte (TB) flash drive via DataTraveler HyperX Predator 3.0.

The official press release hyped the dreamy features of this newest memory-packed flash drive in the market:”Our new DataTraveler HyperX Predator 3.0 allows users to store their entire digital world on a portable USB 3.0 Flash drive,” said Andrew Ewing, Flash memory business manager, Kingston. “The large capacity and fast USB 3.0 transfer speeds allow users to save time as they can access, edit and transfer applications or files such as HD movies directly from the drive without any performance lag.”

The DataTraveler HyperX Predator 3.0 sports the fastest speeds from Kingston—240MB/s read and 160MB/s write. It supports Windows 7, Windows 8, Vista, XP and Mac. The most powerful flash drive to date has USB 3.0 functionality and is backwards compatible with USB 2.0.

Yes. Soon enough, 1TB will be very handy, Kingston was able to squeeze that large of a memory in a finger-sized device. However, the joy can turn into a terrible heartbreak in the event that you lose it.

The price of the 512GB is a staggering $1,750.00—a thousand and seven hundred buckets of tears when you lose this expensive piece. The pricing is still not available for the 1TB DataTraveler HyperX Predator 3.0, but is sure isn’t cheap. The 1TB will be tossed for sale next quarter.

But Kingston is not the only one carrying a 1TB USB to CES 2013. Victorinox, the original makers of Swiss knife, will showcase not only their timeless blades, but also a 1TB combination USB 2.0 / eSATA II flash drive to the biggest tech event of the year. What is cooler about this is that the flash drive is crammed somewhere between that world-renowned classic Swiss knife. It has a built-in monochrome LCD that will display drive contents and simple messages. Victorinox drive will sell for a whopping $3,000.

The 1TB flash drive revolution is just one of the many things that are beyond exciting with the largest tech trade show of the year. Be up to date with the happening as SiliconANGLE.com brings you the latest and freshest CES 2013 scoop. Stay tuned!