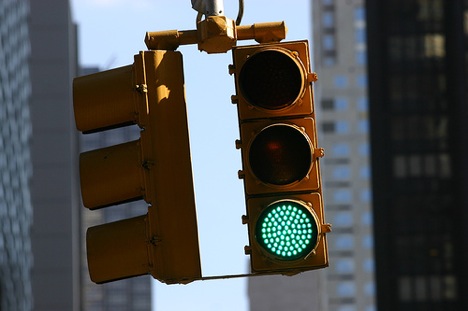 Los Angeles’ reputation for being an absolute nightmare for drivers is well-deserved, but a new traffic control system might just be able to ease some of their suffering. Almost three decades in the making, the city’s newly completed Automated Traffic Surveillance and Control System will synchronize all 4,500 traffic lights in the metropolis, with the goal of not just reducing drive times, but cutting down on pollution as well.

It’s a truly admirable goal, but achieving it has been no easy feat. The project is totally unique with regards to its size and its scope, and is reputed to have cost more than $400 million to implement. The New York Times gives us a breakdown of how it all works:

“Magnetic sensors in the road at every intersection send real-time updates about the traffic flow through fiber-optic cables to a bunker beneath downtown Los Angeles, where Edward Yu runs the network. The computer system, which runs software the city itself developed, analyzes the data and automatically makes second-by-second adjustments, adapting to changing conditions and using a trove of past data to predict where traffic could snarl, all without human involvement.”

The system is intelligent in that it can automatically adjust the time delay between light changes whenever issues arise. So, for example, if there’s an accident that causes one or more lanes to be closed on any highway in the city (thus causing a bottleneck), it can adjust the lights and give more time to let cars caught up in it all pass through. Alternatively, it can also be used to help keep public transport running on time – if the buses are late, the system can help them to pass through the lights faster and get back on schedule.

Traffic jams will still be unavoidable of course, but there’s a definite improvement in the overall flow of cars on the road. According to officials, the average time to drive 5 miles in the city before was 20 minutes. With the new system, this has been reduced to just 17.2 minutes.

Underpinning the new system is the software that LA’s traffic people have designed. Essentially, every single highway, lane, intersection and vehicle represents a data point with variables that are in a constant state of flux. Managing all of this is a tough problem to solve, which is why computers are used to automate the entire system. Not much is known about LA’s Automated Traffic Surveillance and Control System software, other than that the city built it themselves, but it’s likely to be similar to what IBM is doing in Boston, where engineers are mining traffic data so they can make real-time adjustments in order to ease congestion in the city.

Synchronized traffic lights aren’t the only thing that’s in store for cities of the future. What with the number of cars on our roads rapidly piling up in cities across the world, tech companies like IBM are designing numerous solutions to cut back on congestion and pollution. IBM is actually something of a leader in this field, as its also developing software that’s capable of predicting driver’s behavior, presumably to work in tandem with its traffic monitoring programs.

IBM’s Smarter Traveller app for smartphones basically tracks driver’s movements as they make their way around the city’s roads, slowly learning their daily routine. For now, the app is only available in California, where it hooks up with a system of 700+ road sensors previously installed by the state’s Department of Transportation. The sensors gather traffic data along the state’s key highways, tracking the speed of cars and how many vehicles pass by each minute, building up a real-time picture of the city’s traffic situation. The Smarter Traffic app can tap into this database in order to check on driver’s daily route ahead of time, and warn them about any traffic congestion, even suggesting alternative routes to avoid this.

These aren’t the only developments. We’ve all heard about Google’s driverless cars project, and it’s not difficult to envisage these intelligent vehicles one day tapping into traffic systems like the one in LA or IBM’s variety. There are other smart apps in the pipeline too – like the one being developed by Ford that gives drivers advance warning of congested spots, and Honda’s prototype tech that actually monitors driver behavior and warns them if they’re responsible for causing any hold ups.

Public transportation is another fertile ground for technological progress, with services like buses and trains having plenty of potential to be optimized in order to meet their passenger’s schedules. To do so, IBM (them again) has developed analytics software capable of tracking the movements of commuters through a city in order to gain insights that can help city managers better plan transit routes and improve the efficiency of public transportation systems. Called Insights in Motion, the project is a First-of-a-Kind collaboration between the cities of Dubuque in Iowa and Istanbul, Turkey.

Insights in Motion draws on transit data, census records, geo-spacial information and cell phone data in order to track the movements of thousands of people through those two cities, correlating this data with speed of travel and travel times. By doing so, the system is able to gain an understanding of which transportation modes people are using, where people are going to and from – for example, to work, school, shopping etc, and ultimately better optimize transportation schedules and routes to deliver a faster, more efficient and safer service.

It’s difficult to say how of an impact all of these hi-tech solutions will have on traffic congestion in our cities. At the end of the day, there’s still always going to be a considerable amount of traffic. One danger lies in the prospect that – if we can leverage technology to reduce congestion – people might suddenly decide that the roads aren’t so bad and start buying even more cars to clog them up with, creating a vicious circle if you will. Ultimately, the technology will only help us so much, but its nice to know that we seem to be on the right track.