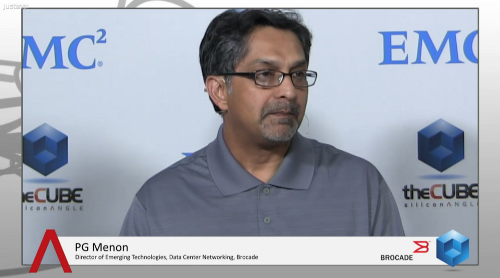 “OpenStack is a great platform for cloud computing. OpenStack is a single platform from where you can manage all the sets of resources,” PG Menon said, no longer needing the silos that are part of current architectures. OpenStack is going a long way in fulfilling that dream of central management.

Speaking of the company’s Ethernet fabric solution, PG Menon called it “the de facto underlay for all the overlay technologies.”

“Brocade’s focus is the infrastructure,” Menon said. “It has to be there for the SDN stuff to run on. We are focusing on creating that infrastructure.” Brocade customers want the company to provide and end-to-end solution, they want it to guide them through SDN.

The right acquisitions can curb the competition

Speaking of Brocade’s recent acquisition, Vyatta, Menon mentioned their soft router is already launched and is available on the market. Vyatta is part of Brocade’s SDN strategy and blends well with its Ethernet fabric developement, OpenStack efforts and connector development.

Asked to explain how Brocade compares to their competition, with a specific focus on Cisco, Menon said that “whenever there is an opportunity, there will be competition.” “What customers want is a clear direction where SDN fits in,” and Brocade gives a clearer answer than its competition. Cisco, on the other hand, has three different approaches to SDN, it has multiple fronts open.

What’s next for Brocade?

As far as future plans are concerned, Menon stated the next thing Brocade will focus on is how does SDN, or  software-defines storage interplay. How do the silos communicate with each-other, answering that question will be the next step.

Commenting on cloud adoption, he pointed out that enterprises are moving to the cloud. Some just don’t want to be bothered with managing IT. But there are aspects of IT that will remain with the enterprise. They will depend on vendors like Brocade to complete the transition to the cloud.