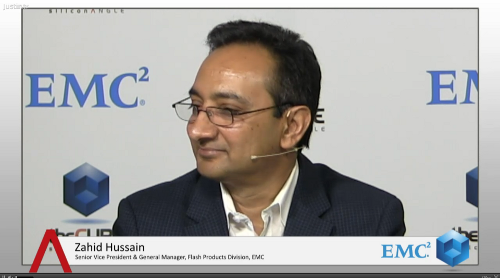 “We feel great about the portfolio we’re bringing to the market,” Hussain said, mentioning a great transformation to flash-based architecture that the storage industry is currently undergoing. Discussing mindset shifts, he stated that the performance one’s getting out of flash is not just about “a faster version of your storage,” it will change everything one expects, how data is analyzed or visualized, applications starting to expect something different from the infrastructure, etc. As the infrastructure changes, applications also change and then further accelerate changes at the infrastructure level.

Hussain also said deployments of flash at different levels of the stack will exponentially increase in the near future. EMC is currently focusing on driving latency to its lowest possible levels. “We should expect that a large class of workloads will fit comfortably in flash environments,” he said, while a lot of enterprise customers will get terabytes of flash storage.

Flash is not just faster, he stressed, what one gets from flash is also a reduction of power which translates into lower total cost of ownership. Flash-based environments help reduce operational expenses, the TCO of such an environment will thus become compelling. “We will start to see that the cost effectiveness of putting your hot data on flash will become more and more compelling”, despite the fact that it’s not likely for companies to store all their data on flash.

Talking about EMC’s strategy, Zahid Hussain said that “we’re under pressure to innovate. […] We are under pressure to do the right thing for our customers,” not cannibalizing  other products is not a concern. There is overlap between some of EMC’s products, he agreed, but it’s better to overlap than to have gaps into what the company is offering its customers.

Speaking of future trends, Zahid Hussain pointed out a new class of applicationss, a new generation, that increasingly operates off a memory tier, driven mainly by open source environments and slowly moving into the enterprise. A lot of the value will be in constructing the software layers to allow users to scale this new app class and connect to the capacity.  He also mentioned that currently the industry has to deal with very large scale infrastructures, while answering key questions such as how to resource manage across them and how to provide all the software tears for them. “That is where we want to innovate,” he added.

What else can software do in the datacenter?

Asked what should be done in software, beyond software-led infrastructure, Zahid Hussain said getting to a model where you can continue to drive lowest latency in a scale environment will become very important. How do you manage this at scale, how do you manage the liability — these will be the key questions. The innovations in software will revolve around scalability and getting to a resource manage abstract model.

Talking about the stack and EMC’s storage management and data management directions, Hussain said they were working on making it much more of a self-service model. Stressing future development trends, he mentioned that “we’re making it possible to migrate data across different array types,” as well offering automation in how data is provisioned on flash-based storage.