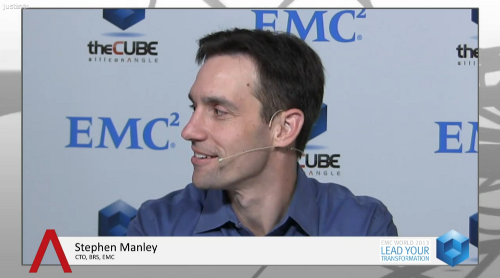 Recapping the BRS results since its launch a  year ago, Manley mentioned the new releases for their Data Domain solution, the latest version of their Data Protection Advisor, which is built around the philosophy that how a company chooses to backup does not matter, as DPA gives central visibility into backup data regardless of the backup method. DPA is also more scalable in this latest version. New software releases pertaining to Data Domain also focus on increasing the scope into the archive space.

Manley agreed that, in a way, backup is an inhibitor to application development. He mentioned that for a long time, we lived in a world where application developers, the ISVs that actually made apps, didn’t really worry about backup. The major shift in this was created by Oracle when they started to optimize backup to make applications run faster. Oracle is currently focusing “on allowing the backup infrastructure to scale.”

“It’s an interesting economy for us,” Manley said, explaining that from his perspective, looking at the value of the backup administrator and backup stack, the real value is in the centralized management and reporting. “I want the data to be safe first and foremost, and I want to make sure that as the vendor […] we say that no matter how  you protect your data, we’re going to provide you the visibility.”

Asked what is needed to bring backup as a service forward, Manley said that “it’s not a technology problem first, it’s an orientation and focus of the group first. A lot of what we do is really working with the backup engineers and data protection engineers” and explain they are not being made redundant, they are being putting in a more high-value role.

The protection storage architecture started as an internal design, he said. “Just as customers need an intentional architecture, we needed one too.” He also added that a backup and recovery solution needs to work in all environments, be it ViPR, Oracle or SAP. Considering this strategy, the best part of ViPR is that it takes all the purpose-built arrays, recognizing that each of them is best for something, rather than trying to use one to solve all problems and answer all requirements.

As far as future plans are concerned, Manley said that EMC’s BRS focuses on both short-term, go-to-market visible goals, such as bringing together the backup software or following the data protection suite with deeper technical integration, and technology-oriented goals, such as completely re-imagining data protection cataloging, adding flexibility and making it application independent over the next 24 months, or getting the data domain moving up the stacks.