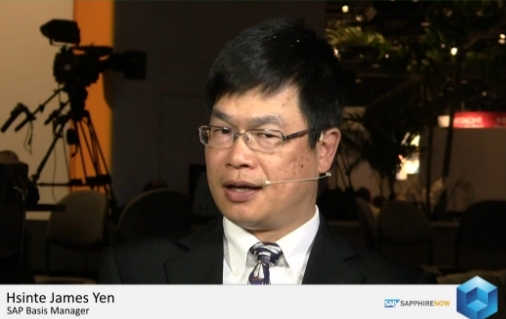 Hsinte James Yen, SAP Basis Manager, visited theCube on Day 1 of SapphireNOW 2013 and discussed with hosts Dave Floyer and John Furrier about the general workflow, the strive to go green, and the company’s efforts at reducing costs.

For SAP, one step to cut down the costs was the reduction of licences from from 180 to 160. The reduced number of CPUs meant a reduced number of licences and a significant reduction in cost. The licence structure is very special in SAP, allowing the user to deal with a bundle. SAP and Oracle work well together because it is possible to buy Oracle licences and bundle them through SAP.

After the implementation of SAP and the virtualization of VMware, the company strived for a better performance. The usage for non production systems was not as green as the company wished. So by using VMware, it became possible to easily shut down clones to save the energy during the non-working days.

This is SAP’s game plan: use the VMware functionality to reduce the costs – not only the hardware costs, but also the costs related to energy consumption. “Our direction is to go green,” confirmed Hsinte James Yen.

Yen is not a big fan of the multi-vendor systems, because it’s harder to keep people accountable. He strongly believes that in order to have a smooth workflow, there needs to be a “single point of contact”. For SAP, this is EMC. They are solely responsible for identifying the problems, offering the expertise and solving whatever issues might be arising. EMC is tending the whole infrastructure, inclusing SAP consulting, and everything related to servers and storage.

Yen’s vision for the future of the company is virtualization and maximizing the use of the available resources.

One way to do that is consolidation and improving the workflow, meaning centralizing data centers and creating more flexible workflows. This seems to be the efficient method, and there are many who are vouching there is more savings in the consolidation of the workflow than in the reduction of the instances themselves, because they need less people and analysts. Yet, consolidation will also mean that a lot of people could be out of a job.

However, because there is an evolving ecosystem, an ever-changing business model and new technologies and cloud services, this also means that some challenges can be turned into job opportunities. Some of the people that become redundant after consolidation will have the chance to do something else as part of the company’s five-year development plan.