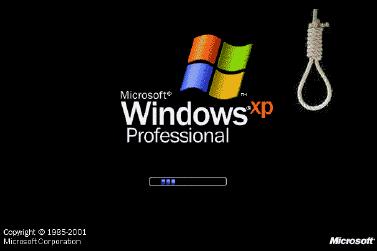 When a service or product is nearing its end, people are often bummed about it.  But that’s not so in the case of Hewlett-Packard, which is getting pretty psyched up about one Microsoft product that’s soon to be retired.  For HP, the death of Windows XP can’t come soon enough…

Microsoft announced that by April 8, 2014, the company will no longer support Windows XP and Office 2003.  These products will still function, but users will no longer be able to receive updates and bug fixes.  Because of that, most people will likely decide to install new Microsoft products, or better still go out and buy one of the new PCs or laptops that have Windows 8 and Office 2013 pre-installed.

It’s the prospect of the latter which HP is getting so excited about.

During HP’s user conference yesterday, the company presented attendees with a slideshow that began with a simple, “Goodbye XP, Hello HP.”

According to Enrique Lore, senior vice president and general manager of HP’s business PCs, the company expects that XP’s demise will push HP products more than the release of Windows 8 ever did for it.  Lore stated that 40-50 percent of businesses are still using XP – and the vast majority of these will look to update their systems. As a result, HP is gearing up behind the scenes, getting ready for a flood of enterprise users to replace their hardware next year.

This fresh bout of optimism from HP comes just weeks after IDC reported that the PC market slumped a record 13.9 percent from the previous quarter. The analyst firm added that it expected that PC shipments to decrease by another 1.9 percent throughout the rest of this year.  However, this forecast was soon revised again, with IDC stating that PC shipments would experience an additional 7.8 percent drop by the end of 2013.

Though HP is still the number one PC vendor in the industry with a 15.7 percent market share, consumers’ growing interest in smartphones, phablets, and tablets has made a huge dent in HP’s hardware business.

But with enterprise users likely to abandon their Windows XP PCs and laptops en masse between now and next April, things could be about to turn around. While HP can’t be sure that everyone will adopt Windows 8 – after all, Windows 7 is still going strong – the chances are that more than a few businesses will bite the bullet and upgrade to the latest system Microsoft has to offer.

If so, the death of Windows XP could well turn out to be the “Hail Mary” pass that HP and other PC manufacturers need to cauterize their bleeding PC sales.