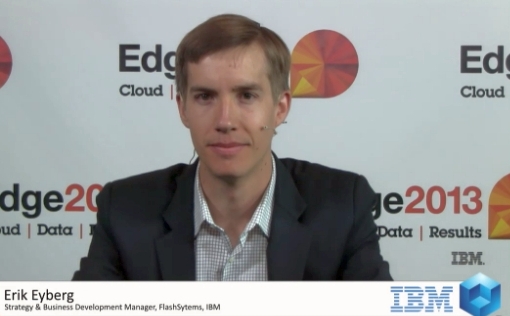 theCUBE co-hosts Dave Vellante and Stu Miniman interviewed Erik Eyberg at IBM Edge 2013 in Las Vegas this week. Formerly with Texas Memory Systems (TMS), and with a solid technical background, Erik has been appointed Strategy & Business Development Manager for Flash Systems with IBM, after Big Blue’s acquisition of TMS. IBM has invested one billion dollars in Flash, a bold move and a big commitment to develop this promising ecosystem. Since then, the project and its team have been steadily growing, taking effective steps to bring it to market.

To Vellante’s intel, many of the current customers are putting the IBM Flash system product behind SVC. The question is whether this new layers puts an overhead into the system. It’s common that customers will leverage the SVC stack and put TMS behind that. Some customers put Tier 1 Storage behind the SVC. Conceptually at least, that adds a layer of overhead. Vellante wanted to find out from Eyberg whether that was true, and whether it really mattered.

Eyberg agreed: “Anything in the data path adds some level of overhead.” The real question is “what are the benefits you get out of this”, stated Eyberg. The traditional Enterprise Storage customers who want the compression and the ability to replicate, and are unable to get that from the application layer, if they need that in the stack, it can be provided with the help of SVC. That is carried out without compromising the performance of the Flash system in a significant way.

“Does it inject overhead? Yes. But, for the price of that 100 microseconds, you get basically all the Enterprise features of a Tier 1 array. You have the performance and the feature functionality, a winning combination for many of our clients”, explained Eyberg. The performance is even better, as the customers get the performance of a Flash system, without compromising on the features.

Miniman wanted to know whether the SVC could also help with scalability. Erik Eyberg further explained that the Flash system boxes were designed to be a basic, modular device that could be deployed in increments of one unit. If the customer needs capacity aggregation or pulling, that’s where things like Sand Volume Controller come into play. SVC scaled up to an 8 node, allowing very large sets of compute resources.

Many of the clients who are deploying this technology – for the tactical type deployments (fixing a specific problem) – do not need more than 20 TB of capacity. It’s only for the large scale, more strategic type deployments (a replacement for the Tier 1 disk), that SVC is brought in to enable the Enterprise features and functionalities that Storage team is used to dealing with, as opposed to the application owner types sale, when they are solving the technical type problems.

“Within the Flash system, we typically deliver all the scalability that the clients are interested in. If we need to go further than a single Flash system, or a stack of independent Flash systems, that’s where SVC comes into play”, said Eyberg.

Where does flash fit in?

How does Flash system fits in with the rest of the stack? Has this been integrated at all? These were the next questions Vellante and Miniman had for Erik Eyberg.

“With the flex system architecture you can get a store-wise V7000 node, and that has the external virtualization capabilities. That is a deployment scenario that we see in increasing numbers with Flash systems,” explained Eyberg.

Most of the Flash system type devices are getting in these environments where there may not be much of an IBM footprint at all. If SVC is already there, it’s going to be an easy fit. However, if the client needs the Enterprise features and functionalities, we’ll bring in Flash system + SVC. If we can get that functionality from elsewhere in the app, or if that functionality isn’t required, a small Flash system device will suffice. There are a lot of different ways to deploy this technology, concluded Eyberg.