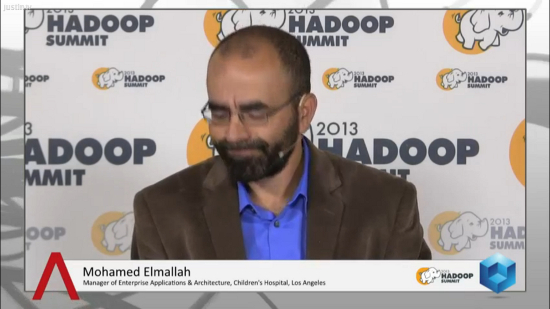 Mohamed Elmallah, Manager of Enterprise Applications and Architecture at the Children’s Hospital in Los Angeles, discussed the hospital’s implementation of Hadoop and the value they have driven from it with theCUBE co-hosts Jeff Kelly and Dave Vellante, live at the 2013 Hadoop Summit

The Los Angeles Children’s Hospital has bee around for over 100 years and has implemented the electronic medical records system in 2004. They are now rolling out the EMR implementation for their outpatient clinics.

Why Hadoop for healthcare digitization?

The drivers that lead Hadoop were based on their needs of allowing research department scientist access large amounts of data, the hospital’s patient data and data from around the world. Researchers use the data to find data sets on medication, trials, etc. Giving them EMR access to data was challenging, as they usually need all the data for a continuous or long amount of time, and before that could not be done without a huge investment on the hospital’s side. When Hadoop was considered, “there was a match between the needs of research on data and the budget we had,” Elmallah explained.

While the economics of Hadoop was a big driver, the platform was also a good match because researchers are usually data scientists and were already enthusiastic about an in-house Hadoop implementation.

Asked if his interest in Hadoop was unique among his peers, Elmallah said “I wouldn’t say that I am unique, there are other hospitals and health providers that have started with Hadoop before we did.” It is a matter of finding it, “you have to be in the right place at the right time.”

As far as applications built on top of Hadoop to drive research value from the available data, Elmallah explained that the researchers using it were the type of developers that were comfortable using Java or other languages, and “they did not need us to build a whole tear on top of Hadoop. We provided them with a simple UI,” he says. HTML and JavaScript based. It was not meant for physicians and other end users that are not of a technical nature.

Hadoop use cases in healthcare

Asked to talk about use cases, Elmallah said the researchers using Hadoop already had a grant “that needed them to use at vital signs of patients” during their stay at the hospital. Before, a nurse or health care provider would take snapshots of the vital signs and put them into the EMR. They didn’t have time to do that a lot, four times per day at most. “Researches wanted to see a whole history, a continuous curve of the vital signs,” in order to determine the patterns. That continuous storage of high frequency data could be achieved easily with an SQL server and then storing it on HDFS.

As the hospital streams data off machines, Jeff Kelly asked about Elmallah’s take on the benefits of the industrial Internet. He explained that there were two points of view: the research, “to a certain extent you can think of it as after the fact,” the patient is no longer in the hospital when the data is accessed and analyzed. The second dimension is regarding the things you can do with this data on the spot. There are companies that provide some monitoring of that feed and alert nurses or health providers when needed.

Asked about future access to data by end users, other than researchers, Elmallah said that “electronical medical records systems are relatively open today,” allowing them to customize the UI, to pull data from any source. “We’ll be able to get the data out of the Hadoop and tier it into the EMR for our end users.” Mobile access to data is also important, as hospital employees need to able to access data from anywhere, that is why they currently have access via mobile devices.

Here are 5 insights you might have missed from the AWS Storage Day event
HPE GreenLake brings the cloud to all your data with a special Sept. 28 announcement
Upcoming AWS Summit assesses a post-pandemic, cloud-based future
Building interactive data apps: Inside ThoughtSpot Everywhere's open developer-centric platform
Ascend.io partners with Steady Platform to pull DevOps principles into the data world