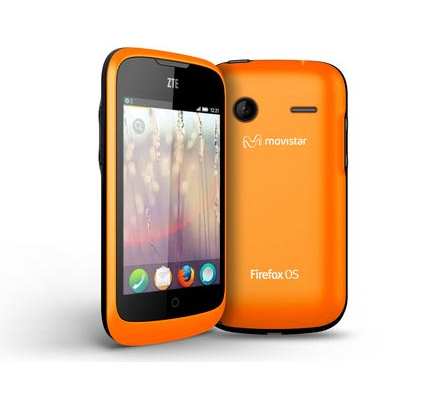 Last February at the Mobile World Congress we saw a clutch of mobile phone carriers pledge support for Mozilla’s Firefox OS, its new HTML-5- based open web mobile platform that it hopes will have an impact in the low-end smartphone market. Now, just four months later, Mozilla is announcing the launch of the first commercial Firefox OS phone to go on sale to the public – the ZTE Open, which is set to hit the shops in Spain tomorrow on the Telefonica network.

The ZTE Open obviously isn’t going to be much of a threat to Apple and Samsung’s dominance just yet. The device will go on sale for just €69 (around $90), and includes a €30 pre-paid balance plus a 4 GB MicroSD card. For contract buyers, Telefonica is also offering zero interest financing, which according to IHS Screen Digest analyst Ian Fogg makes the phone a “very compelling,” offering.

“Feature phones are dead, finally… Now there’s no price reason not to own a smartphone,” tweeted Fogg.

If the pricing doesn’t give away the fact that this is an entry level smartphone, the extremely modest specs of the ZTE Open certainly do. It features a 3.5-inch HVGA TFT touchscreen display, comes with just 256MB of RAM and 512MB of ROM, plus a 3.2 MP camera on the back. However, it’s the services themselves that sets the ZTE Open, like all Firefox phones, apart. Rather than using traditional apps that we’re used to on Android and iOS, Firefox phones run HTML 5 applications, which are basically just ‘web apps’ ran inside their own web browser. It will have all the essentials you need though, including location services provided by Nokia’s HERE Maps, social media apps from Facebook and Twitter, plus Firefox OS versions of popular apps like Pulse, Soundcloud and Airbnb. For more apps, users can just visit the Firefox Marketplace to see what’s available.

Although it’s only launching in Spain tomorrow, Telefonica has said that it’s planning to ship its Firefox phones to additional markets in the next few weeks, which include Brazil, Colombia, Hungary, Mexico, Poland, Serbia and Venezuela. This is all part of Mozilla’s strategy, which is to try and establish itself in markets where smartphones themselves remain largely unestablished. The majority of people in Latin America don’t yet own smartphones, and the thinking goes that by targeting these markets, Firefox OS has a much better chance of succeeding than if it tried to take on Google and Apple in markets these companies already dominate. According to Telefonica, the ZTE Open is just the first of “a number of Firefox OS devices”, and eventually the carrier is hoping to launch higher spec models in its initial nine markets.

Can Firefox Snap At Android’s Heels?

It’s too early to tell if Firefox OS can emerge as a genuine ‘third’ mobile operating system, but the support that the platform has received from so many different carriers is telling. Only last week Telefonica announced plans to push Windows 8 in a joint marketing effort with Microsoft, and the Firefox arrangement is a part of that strategy – namely, to lessen their dependence on Google’s Android, which commands a 70% share in five key European markets, according to research from Kantar published earlier today.

The problem with Android’s dominance is that carrier’s see their position as being weakened, as they’re forced to comply with whatever Google demands of them, which generally means pre-installing its suite of apps onto their devices, or not being able to use Android at all. This is a big incentive for carriers to push alternatives – if someone like Firefox OS can command a decent market share, carriers will no longer have to kowtow to Google’s demands. In addition, Firefox OS is truly open-source, unlike Android, and so it could give them a vehicle to promote their own services without needing to ask Google’s permission first.

For now, Firefox OS remains an interesting but unproven proposition for handset makers. The initial response for Firefox phones has been positive, as we saw when the first developer phones running the OS were sold out in less than two hours, but the real litmus test will be whether or not it can tempt some of the bigger carriers and handset makers onto its side.

So far, Sony is the only big name to express “an ambition” to release a Firefox phone next year, but the opportunity certainly exists for Mozilla. Earlier today it was reported that HP is planning to enter the smartphone game, and the company even hinted that it was looking at using an OS besides Android. A company like HP would be the perfect fit for Mozilla – a big name brand that’s yet to establish itself on the smartphone scene, it’s chances of standing out against the likes of Samsung on Android would appear to be slim. But if it came out with a high-end, high-powered Firefox phone instead, it’d surely recieve a lot more attention from curious consumers.