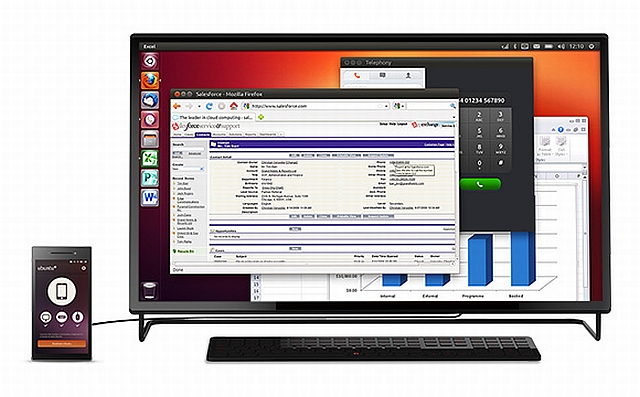 Will an Ubuntu Superphone Give Enterprises the Edge?

Canonical’s bold effort to crowdsource $32 million to fund its Ubuntu Edge ‘superphone’ has generated a wave of excitement since its launch seven days ago. The company’s marketing team has been pulling out all the stops to try and reach its lofty target, offering a number of discounted ‘perks’ to try and tempt backers, while Mark Shuttleworth presided over lively discussion on Reddit to espouse the phone’s benefits. Ubuntu fanantics seem to have heeded the call, pledging exactly $7,297,624 at the time of writing to give Canonical a realistic chance of hitting its campaign target, but while this is encouraging it’s yet to entice a single backer from one of its key audiences – the enterprise.

That Canonical is desperate for enterprise backing is clear enough. The gadget geeks and the open-source crowd could always be counted on to offer their support, but in order to reach its goal Canonical’s going to need some help – $4 million worth of help to be exact – for that’s the combined value of the fifty ‘enterprise 100’ bundles it’s offering as its most expensive pledge, at a cool $80,000 each.

To date not a single one of those bundles has been sold, but Canonical hasn’t given up hope just yet, with the company’s head of engineering Victor Palau taking time out to present the business case for the Ubuntu Edge in an interview with InfoWorld yesterday.

Why the Enterprise Needs a ‘Superphone”

When asked the reason why the Ubuntu Edge is such a good fit for enterprises, Palau gave a simple but compelling answer – it’s all about convergence. The device will be able to significantly reduce hardware and operational costs, thanks to its nifty ability to dock with a keyboard and display and boot a full desktop version of the Ubuntu OS.

“A converged phone like Ubuntu Edge is a much more economical solution both in terms of hardware and for running operational cost,” explained Palau.

“You can have a single data plan without having to train the user on how to set a Wi-Fi hotspot on their phones. You’ve simplified to only require a single device management strategy. And finally, you can remote wipe any data on the Ubuntu Edge, something which is hard to do with laptops.”

Palau also made a case for CTOs, saying that the Edge would facilitate their ambitions to adopt future technologies like OpenStack and Software-as-a-Service that are incompatible with clunky old Windows clients.

“Ubuntu Edge is a change agent, which not only encourages higher mobility, but will also drive faster adoption of SaaS via either Remote Desktop technologies (when docked to a monitor) or standard Web 2.0 business applications like Salesforce that can be easily accessed from both platforms,” Palau enthused.

Palau was keen to stress the added mobility and security of the Edge, insisting that in many cases the phone could conceivably replace PCs and smartphones altogether, giving enterprises an ideal one-size-fits-all solution to their employee’s IT needs. Whilst admitting that there will always be cases wherein specialized workers might need the of a full-fledged laptop, he was particularly enthusiastic about the Edge’s potential for so-called ‘mobile workforces’.

“People who split their time between two or more workstations… These types of employees can become a security risk as they commute often and are more likely to misplace their laptop,” he said.

These sound like pretty compelling reasons, but what about those enterprises that rely on critical Windows and iOS apps? Can these companies conceivably migrate to the Ubuntu Phone platform without disrupting business operations, something that for many CIOs would be one of the biggest considerations? According to Palau, that shouldn’t be a problem thanks to Ubuntu’s integrated Windows VDI support which allows clients to be run on the OS with minimum of fuss.

As for the iOS apps, Palau answered that many of these are now also available on Android – less we forget, the Edge will come with the ability to boot Google’s OS as well as Ubuntu, effectively negating that particular problem.

Can the Edge Cut It?

Canonical seems to have thought of everything, and indeed there’s no question that the Ubuntu Edge could be a good option for some in the enterprise. But whether or not anyone will actually follow up and embrace its vision of convergence remains to be seen. With over a week gone and not a single enterprise bundle sold so far, things aren’t looking too promising though, and that’s quite sad to see.

Okay so Canonical and Mark Shuttleworth can be quite controversial at times, but they deserve credit for the massive gamble they’ve taken on the Edge – if nothing else, the level innovation and design passion is wonderfully refreshing to see, particular when you consider Microsoft’s dismal efforts in the mobile space, and the rather trivial updates seen on Android and iOS in recent years.

We wish Canonical the very best of luck if only because what it’s proposing is a damn good idea, even if it’s yet to show that it really can work. In any case, Canonical is surely going to need all the luck it can get it it’s going to actually reach its $33 million goal and make this thing a reality.