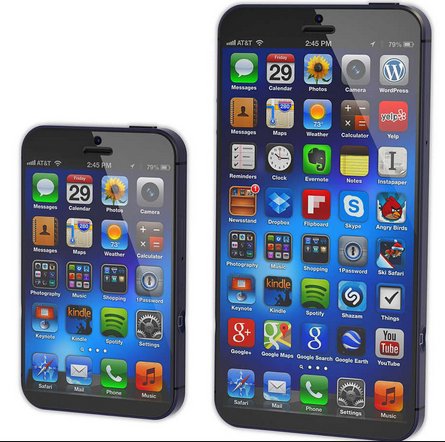 Apple Races To Enter The Phablet Market Next Year

Rumors of a Apple launching a phablet have been abundant this year.  Back in July, it was reported that Apple was testing different sized screens for the iPhone and the iPad, and with September 10 so close, fanbois were on the edge of their seats wondering if all the rumors will have some truth to it.

A new report from the Wall Street Journal states that Apple is testing iPhone screens ranging from 4.8 inches to as high as 6 inches.  If this is true, then we can expect that Apple will be launching an iPhablet some time soon.  Question now is, when can we expect to see it?

The report stated that Apple will be launching both high-end and low-end iPhones this coming Tuesday, but apparently there’s no phablet in the works just yet.  Instead, the report states that the phablets will probably be coming alongside next year’s version of the iPhone as Apple tries to catch up with Samsung – who has been raking in the profits from offering different sized and priced devices.

It’s not entirely impossible for Apple to offer different sized iPhones, after all, its revolutionary MP3 player, the iPod, sold millions especially when it became available in different sized variants.  The iPad has also gone down this route when Apple introduced the iPad mini last year.  It proves that having a choice, whether it be color options or different sizes, appeals to consumers.

When Apple released the iPhone 5 with its 4” screen, the smaller screened iPhones were still up for sale which gave consumers the option of acquiring either a larger screened iPhone with all the upgrades, or a smaller screened iPhone with the OS upgraded.  It is expected that when the iPhablet rolls out, the smaller iPhones will still be available for purchase though their internal components would remain the same.  This would allow Apple to sell cheaper iPhones, offer various sized phones, and cater to the whim of consumers.  And if Apple phablets won’t be a hit, they would still have the small iPhones as their fallback.