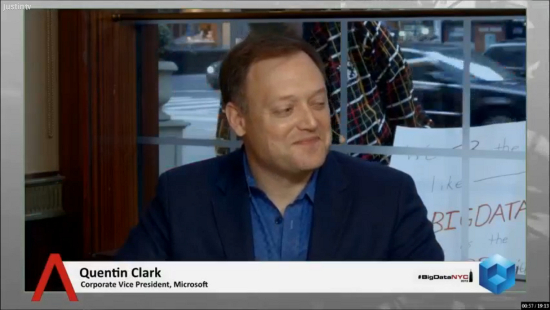 Why Microsoft isn’t building its own Hadoop distro | #BigDataNYC

“We’re here here because we’re super committed to Hadoop,” Clark said, explaining that Microsoft is dedicated to help its customers embrace the benefits Big Data can provide them with. “Hadoop is the cornerstone of Big Data but not the entire infrastructure,” he added. Microsoft is focusing around adding security and tool integration, with thousands of hours of development put into Hadoop, to make it ready for the enterprise. “There’s a foundational piece where customers are starting,” which they can build upon and Microsoft focuses on helping them embrace Hadoop as part of the IT giant’s business goals.

Asked to compare the adoption of traditional Microsoft products with the company’s Hadoop products, Clark said, “a big part of our effort was to get to that enterprise expectations.” Security and tools integration, getting Hadoop to work on Windows is part of that effort. Microsoft aims to help people “have a conversation and dialogue with the data. We make sure we funnel all the data to help them get the BI and analytics” they need.

Commenting on Microsoft’s statement of bringing Big Data to its one billion Office users, Vellante asked if the company’s strategy was to put the power of Big Data into Excel. Clark explained it was about putting Big Data in the Office suite, going on to explain that there is already more than a billion people who are passively using Big Data. Microsoft focuses on those actively using it.

Clark mentions Microsoft has focused on the sports arena, helping major sports leagues use Big Data to power fantasy teams. “We actually have some models, use some data sets. I have a fantasy team that I’m doing pretty well with, partly because of my ability to really have  a conversation with the data. On the business side, it’s transformational. Our ability to gain insight in real time and interact is very different using these tools,” Clark stated.

Why not build its own Hadoop distro?

Asked why Microsoft decided not to have its own Hadoop distribution,  Clark explained that “primarily our focus has been in improving the Apache core, make Hadoop work on Windows and work great. Our partnership with Hortonworks just made sense. They are able to continue to push and have that cross platform capability, we are able to offer our customers a solution.”

Explaining there were great discrepancies in how different companies in the same industries made use of the benefits Big Data, he advised our viewers to “look at what the big companies are doing” embracing the data, and to look what they are achieving with it.

As far as the future of the Big Data industry is concerned, Clark stated: “There’s a consistent meme of how is this embraced by business for results. Sometimes with the evolution of technology, everyone is exploring what it’s capable of.” Now there’s a focus shift of the industry towards what greater purpose it leads to, what businesses can accomplish.