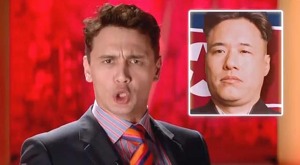 Pirates flock to The Interview as Sony blocks global distribution

Seth Rogan & James Franco’s new movie The Interview was released yesterday and it looks like it might be a hit, at least on BitTorrent.

The movie features a plot to kill North Korea’s President Kim Jong-Un and is widely believed to be the raison d’État Sony Corp. was targeted by hackers acting on behalf of the kleptocratic state late November.

The movie is estimated to have been downloaded 750,000 times according to Torrentfreak, with the number continuing to grow.

Of note is that while the movie may have been released through legal services including Xbox, Google Play and YouTube, it was unavailable outside of the United States. If you’re in Toronto, Melbourne or London and want to do the right thing by Sony and pay $5.99: tough luck, no legal access to the movie for you.

A quick scan of the various torrents late Thursday would indicate that while there are certainly American’s sharing the movie, most of the interest is coming from other countries, particularly fellow countries of the anglosphere.

A surge in piracy where a movie or television program is geographically restricted in distribution is neither unexpected or unprecedented. That Sony has lost income due to piracy is entirely there own fault; sure, it would have been pirated anyway, but there is zero legal reasons why Sony couldn’t distribute the film globally…it is there film after all.

Not worth paying for anyway

If you’re thinking about seeing it, legally or otherwise, don’t go to any effort in doing so. Best described as a romantic comedy given the number of times Franco and Rogen kiss each other in the first 5 minutes, the entire film is nothing more than a 14 year old stoners idea of a great film. Sure, you might get a few laughs, but the bum jokes and crude gay innuendoes wear thin very quickly.

In many ways it’s unfortunate that such a juvenile movie became the poster child for free speech in 2014, but it is what it is. Atleast we do know is that Sony is unlikely to do any movies about North Korea again in the future.